Brevet – means “evidence” in french. To get it one need to take part in official start and finish within time limit. The French, as it said, knows about pleasures 🙂 So I wanted also to be trained enough to have fun. 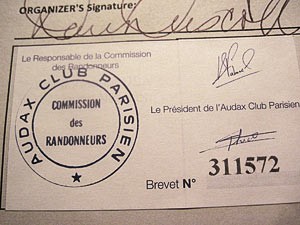 However, even the minimum distance of 200 km  assumes elements of the marathon.

Leaving behind the scenes the rides along the quays of Moscow-river on distances up to 75 + – 25 km without time limits, because it’s not refer to marathon elements. Here I focus on how to go from this level up to 200 km with time limit. 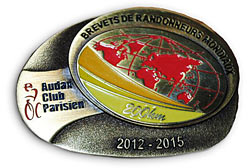 Looks like first brevet of 200 km you can pass in different ways, including only on iron willpower. Such examples are present in network. But specialized forums recommend to pay attention on two points:

1. The total distance of the season before brevet should be 10 times more then distance of brevet, i.e. more than 2000 km.

2. You should be capable surely pass a distance of one and a half times less, that is about 140 km.

Quays of Moscow-river allow to ride segments of 10 kilometers without stopping, sometimes you have to cross the bridges, which also simulates the possible obstacles in the brevet, and from the river almost always ragged wind blows. So it sufficiently good for training. From the total limit of 13.5 hours I deducted one hour that might needed for rest with food, another hour – for possible repair and hour for bad weather conditions. That is, time limit of 200 km is 10.5 hours. Thus, for example, 140 km should be confidently passed more quickly then 7 hours, and 100 km – then 5. If it turns out longer – it means that you are not ready for brevet yet 🙂 Also after each race I put question to myself: “How more kilometres you could ride?” . Brevet we planned to go together with a friend-marathoner. But at the beginning of the season he run in Greece, while I began to prepare alone. We rode at budget MTB bikes weighing about 14 kg, with “flat” (usual) pedals. 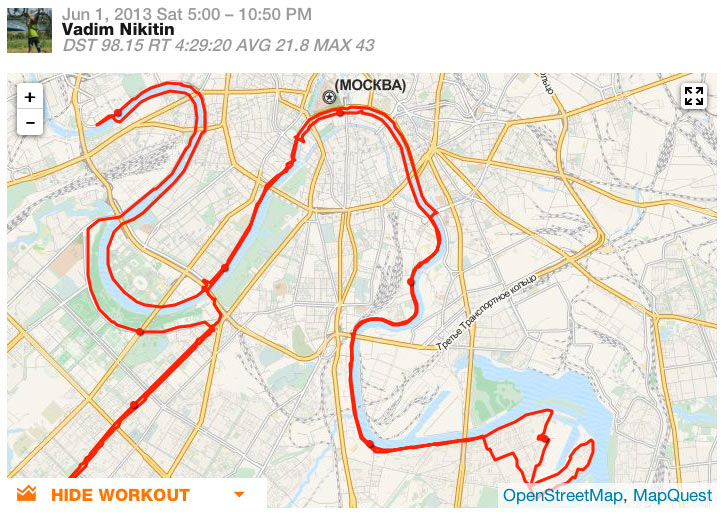 The first checkup for 100 km was failed. On the 90-kilometer I’ve grabbed “Bonk” (or “wall”) – this is when the legs refuse to pedal. But not entirely, of course. They twist on only one cadence (rate per minut) and with minimal effort. The last 10 km to the house I’ve picking up the transmission to meet strictly to these parameters. On the way, I bought a snickers to feed, but it only became worse.

I’ve returned back again to the distance of 75 km, made three runs with a good hit to time limit, but with the understanding that I could not pass more than 100 km.

Then three times with 100 km and twice with 125 km. Limit of 100 km was felt clearly each time. Again returned back to the distance of 100 km, two runs. Every time the power in legs dropped sharply to the end of distance, but “Bonk” was not met.

I digged Internet about the marathon. Everything is very individual, but in the end I’ve found the key. The fact is that the in long steady work muscles are used as fuel solely sugar syrup (glycogen), which is actively produced by the organism. But the main consumer of sugar is the brain. When the brain fears that the sugar may not be enough for him, he gives the signal “Stop Machine” and muscle stops to give power. If the sugar does really become a little, the signal is more powerful – there comes “Bonk”, body should do not have to move from the point of view of the brain. This hypothesis leads to two practical conclusions.

1. The brain can be adjusted. 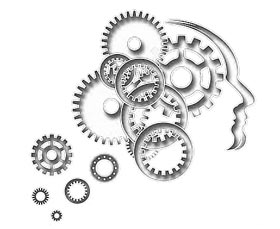 In advance you need to throw a little bit of carbohydrates (sweets or breadstuffs biscuit-type). In terms of actual muscle feeding it is a tiny amount. But the brain calms down.

2. Not throw to the furnace the proteins-fats, since the process of making a sugar syrup can stop, the organism switches to a much slower processing of proteins consumption. It is – about the effect of Snickers in which “thick layer of chocolate”, while chocolate – fats and proteins. 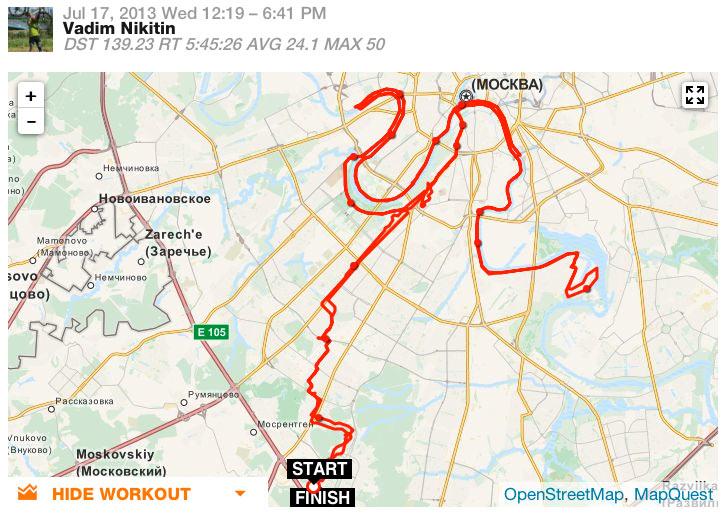 Next ride for 140 km showed the success of this hypothesis. There were three snacks – two hours after start, another two hours later, and after another hour. Each a bite – just simply one cracker and three candied fruit jellies. Legs smoothly accumulated fatigue, but the power did not dropped sharply.

Another check of 140 km was exactly the same. Good recalculated time limit – 9:15 hours and a good sense of possibility to drive another 60 km.

Then we began to ride with a friend who descended from Olympus. About feeding at marathon race he has own experience, and it all so individual that I even did not delved into it. He also needed need to “roll out” for long distances, while we have sufficient time ahead to “planned” brevet – a month.

I’ve considered myself ready enough. Total distance to this moment was 3400 km, of which – 12 test rides for 100+ km. Therefore, I’ve participated in the nearest “unscheduled” brevet. 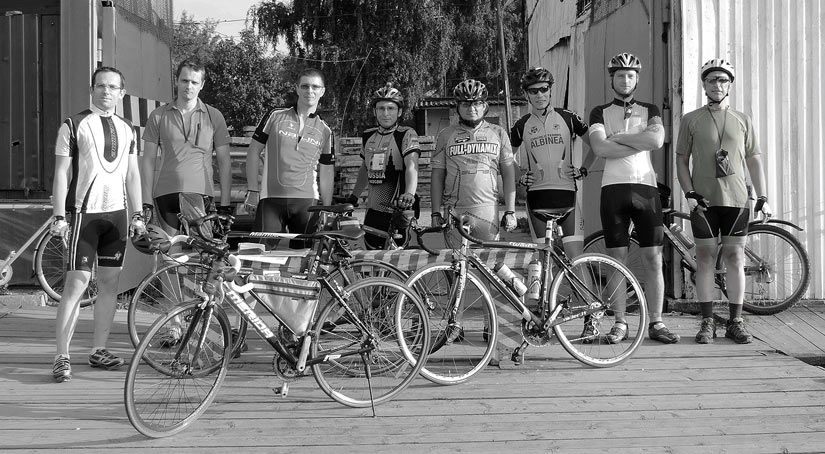 There where a difficulties: a puncture and a very strong headwind in 150 of 206 km, but no “nightmares”. 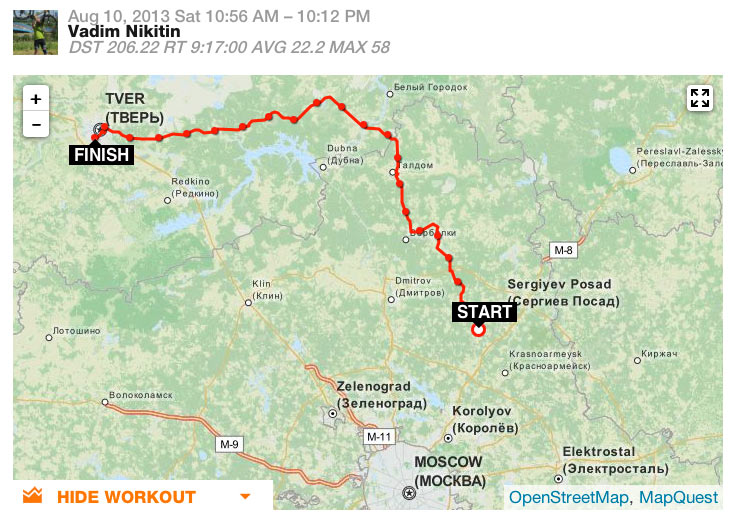 With friend we trained as a team to “hang on the wheel” with turns of five minutes. This gave a couple of km/h of speed and eliminates the struggle against wind. Brevet passed exactly as intended – with a change of 5 minutes, sufficiently fast (9 hours) and with pleasure. 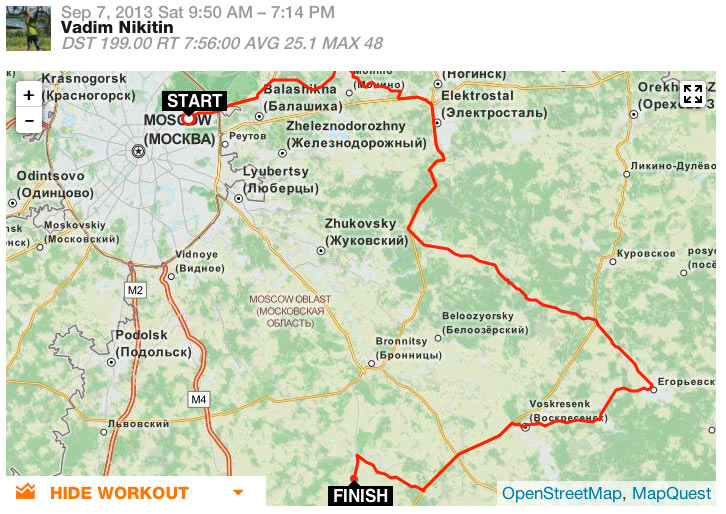