There is quite many experimental data from the happy owners of power meters. Such data could be used for finding cycling perfomance parameters as roller resistance and air drag.

As an example, let’s consider the excellent work “Bicycle aerodynamics for entertainment” (in russian). The author has two bicycles, road bike with aerobars and TT-bike (bicycle for racing with separate start, which usually ride on a flat place at high speeds without a ride in a group), equipped with pedals with integrated power meter. The author has made a series of rides at track and at velodrome in different sitting position from aero to more upright. The main purpose of the work (I think) was to determine for himself how much gives TT-bike compared with road bike. It turned out that the advantage is quite significant, for the same consumed power TT-bike gives significantly greater cruising speed.


From this work I will take only the data for road bike. So-in takes place in three different aerodynamic positions, “hands on pistols” (hoods – in the article), “lower grip” (drops) and “on the sunbed” (aerial). That is, if we look at the picture, it is three left places from the second figures.

In the rides it was measuring speed, which was achieved when a cyclist pedaling with different power. Rides took place on the cycling track (indoor, frequent turns) and at velodrome (in the air, with large straight sections).


As discussed in the article “How spent cycling power during moving a bike“, there are two “muddy” cycling perfomance parameters: coeff. of rolling resistance and coeff. of aerodynamic drag. The other parameters that take power from cyclist can be “kept under control” (this is weight, slope of the hill, efficiency of transmission).

The coefficient of rolling resistance depends on tires (softness, tenacity, proper inflation, accordance to coverage) and from the surface (asphalt of several categories for road bikes or various grounds for MTB). There is quite many dependancies. Industry of tire manufacturers is involved. And not only. Exactly by this parameter  “Niner” in MTB differ from “ordinary” bike with wheels 26, 27.5 inches. That is Niner rolls better, but the bike is heavier. Under what conditions the advantages outweigh the disadvantages? All this depend on determination of this parameter. Then it could be put into calculator and show the conditions in which the advantage will prevail. Or, conversely if to take data on the measurement of power consumed and achieved speed, and from a comparison with the theory it is possible to find the coeff. of rolling resistant for a particular tire. In this regard, particularly pleased that, in the article “Bicycle aerodynamics …” tires on Road bike of author are the same as on my bike 🙂


The drag coefficient is also interesting among cycling perfomance parameters, although it will be parameter of author, whom I have not seen, so compared with can not. Nevertheless, the network has some of the arguments that I can not take by “believe”. For example it is believed that coeff. Cx flow (remember that coeff.  if aero-resistance is the multiply of area of ​​a frontal section and coeff. of smooth flow of air) depends on the pose of cyclist. In my opinion twisting feet and details of the bike give so much turbulence that about different quality of air flow in different poses we can speak very tentatively.

Go to the experiment. We believe that there were no hills. So you can only vary two parameters: coeff. of rolling resistance and coeff. of aerodynamic drag. Since the  power was measured on the pedals, the power efficiency of  0.96 will achieve the wheel. Weight of the author (together with the bike) is not known, will take it to 80 kg. Further, by varying the two cycling perfomance parameters we need to maximize the coincidence of experimental and calculated data for all 6-series of measurements (three on the cycle track, and three at the velodrome).


It graphically shows the results for the three series on the cycle track. 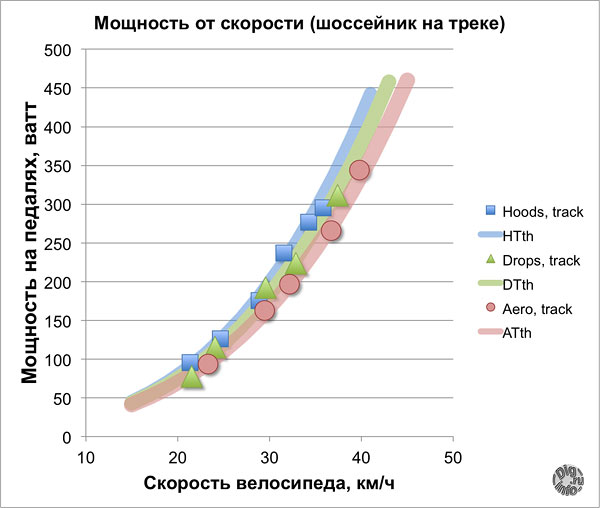 Cycling perfomance parameters were found “by hands”, but pretty tough, because low speeds are more influenced by coeff. of roll.res., while high-speed data from the aerial resistance. To illustrate the “left side” of selection one can divide power to speed (and to the weight so that you can directly compare with coeff. of roll. res.). Here’s the graph: 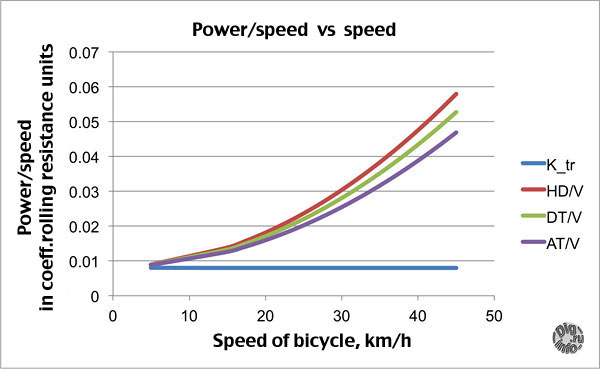 It is seen that at a speed of 5 km/h such dividing the measured power at the speed immediately gives coeff. of roll. res. At a speed of 20 km/h, as in the experiment, the dependence on this coeff. is also quite significant. To illustrate the “right side” more clearly we divide power to the cube of speed: 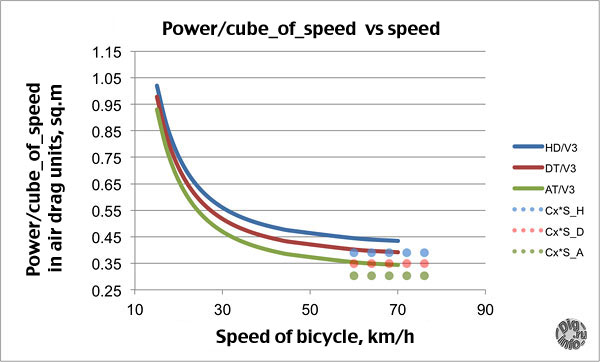 At high speeds, the power goes mainly the aerodynamics, so sharing power at the cube of speed we are approaching the coeff. aerodynamic drag. In general, the selection of cycling perfomance parameters is like handle with two tuning knobs, one is response to left side of mix of theoretical curve to the experimental data, the second to right side. It’s difficult to make mistake in finding of parameters 🙂

To determine Cx that is actually the factor that responsible for the aerodynamics we need to know the frontal area of the author in these poses. That I do not know, but one can take the data from the picture above. Using Photoshop and known diameter of the wheel, this picture is easily converted into square meters: 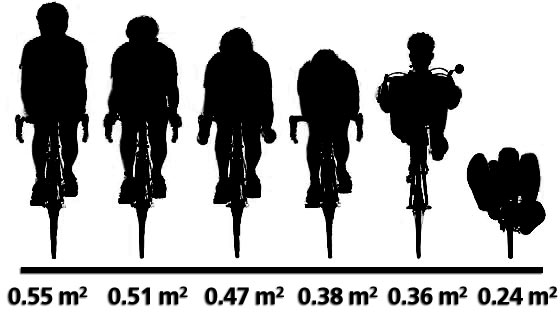 Thus, if we assume that the author is the same as the cyclist in the picture, we get the following values ​​of Cx:

It can be seen that the values ​​about the same, that is the quality of the air flow does not depend on what position cyclist take place. But the value itself of the author is very good, the network is often considered for road bike Cx = 0.88.

So in general, if we have data from measuring of power and speed we can resolve the same information as from imaginary “secret laboratories” equipped with the wind tunnel, and complex instruments for measuring of aero drag and wheel’s rolling 🙂