Description of the method implemented in the calculator “Tyres pressure (road bike)”.

Calculator – in a separate page, accessible directly from the menu here.

General discussion about tire pressure – in a separate note. The general conclusion is: on the real road with grainy asphalt and all sorts of irregularities and pits – the wheels should not be greatly inflated.

It’s about the clinchers and amateur riding on the asphalt road.

Until 2006, the main approach was – to inflate to the maximum “reasonable” pressure, because it is better for rolling and less for punctures. Until now this is point of view  by 70% of the fans. In 2006, an amateur from California – Frank Berto found that there is a limit beyond which there is no reason to pump, rolling does not improve. Empirically, it was found that the limit is determined by the decrease of level of the wheel to 15%. Then using the jack he explored tires of different widths He built pressure versus weight of loading of wheel.

Formula doubted (why 15%?, etc.), it rechecked, raised the threshold of pressure a little, but generally agreed that it work. Above – inflate is not worth, below – was called  “comfort zone.”

The formula does not take into account the width of the rim, the tire rigidity and, quality of the road surface. Besides in the Net it was usually specify the difference between the pressure in wheels of 10 psi, while the formula provides 20-30. Also the formula does not take into account the approach of tire manufacturers that indicate the range of min., below which a tire loses its properties, mainly on puncture and max., above which it is not allowed to pump. Actually Net recommends do not pay attention to it – the real min. is determined by “snake bites”, max. – by the strength of the walls of the rim. 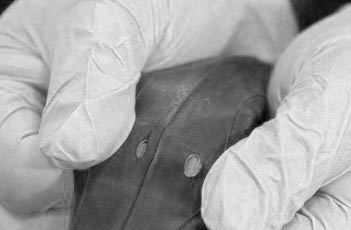 In general, the formula provides an upper limit above which the additional pressure makes no results. But it remains dependence to “non-smoothness” of road. Experience of MTB shows that in the forest – less tire pressure, the better rolling. Potholes that “pass” through the tire, any rebound from the road – lead to deceleration. In general, the feeling of good in rolling when the road sensed by a “fifth point” in all details and there by screwing of pedals also immediately goes into motion – it subjective and not into accordance to measurements. In summary, it looks like the pressure on the “real-life” road should be lower than that by the method of “15% drop”.

Summation of Net’s and personal experiences led to an algorithm, which is implemented in the calculator.

1. From the weight and the width of the tires by the method of Frank Berto it defined baseline data on tire pressure, based on the weight distribution between the wheels of 45/55%.

2. To obtain the pressure of the front wheel is added 8 psi.

3. The resulting values ​​are multiplied by approximately 0.95 (with a slight inverse dependence – for lower weight coefficient is more).

The result makes it possible to avoid the “snake bites”, to achieve maximum comfort and to save rolling.