In the first part of notes about the choice of seat for bicycle pitfalls were identified, any of which may lead to the chouce of one more next saddle. Some of such characteristics were marked for further consideration, and others were considered. In this note I will focus in detail on the longitudinal saddle profile.

Longitudinal profile of the saddle can be very, very different, both in “amplitude” and in shape. Sometimes the profile directly corresponds to the “brand”, and it can be a complex unique shape (as saddles Selle SMP). 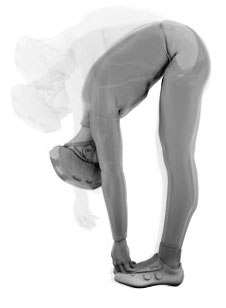 But quite often the manufacturer offers to determine the flexibility in bending of waist, and depending on it to choose a profile from a wide range. The figure on the left for select a seat of brand “fi’zi: k”  (“physique”) shows the maximum flexibility and less flexible options in translucent. Immediately notice that such maximum flexibility generally normal bending of man, I have always believed that the “real” flexibility is when a person can comfortably touch the floor with his hands palms. Nevertheless, such a graduation is pointed and it leads to different longitudinal profiles. Usually less flexibility than the more expressed profile. That is, at the maximum flexibility – flat saddle profile, and at a minimum – a beautiful “modern” shape. 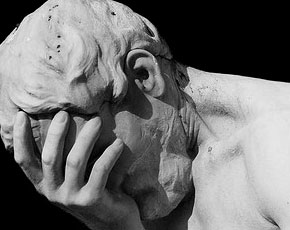 The reason is that the high-flexible in loins cyclist when leans forward, holding a pelvis so vertically that is not press to the saddle by painful soft tissue. If flexibility is not, then cyclist a flop almost on his belly on the frame, in order to reach handlebar. So saddle relief should “soften the blow”. I wrote so exaggerated to show that attitude to such explanations as to delirium 🙂 There are not taken into account, that the back can also be bent.

I think the fifth point in any case be located on the saddle according to the individual structure of the pelvic bones and with “natural” inclination when excessive pressure on the soft tissues of the body will be avoided. A tilt forward depends on the three parameters: mentioned flexibility in the lower back, bending in the back (that giving much more of general incline), and the muscles supporting the back. Plus habit and trainings. Here, for example, photos of time-trial-riders (posture with maximum slope) arranged by varying of flexibility in the lower back from big to say not very big. 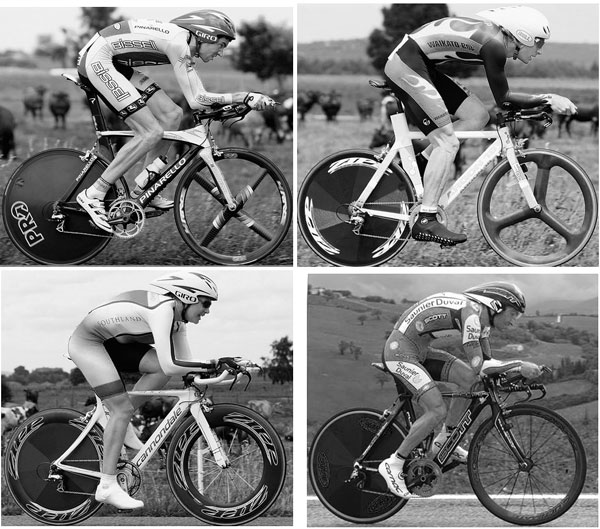 It can be seen that the flexibility in the waist and the position of fifth point – not related parameters. On the bottom right photo minimal of lumbar flexibility is  presented whilethe fifth point on the saddle is most upright, and the slope is done by folded back. By the way, with such a posture is obtained the minimum load on the arms that a big plus for long distance.

Manufacturers with wide range of saddles offer a methods for make choise easier. For example, at site of Selle Italia one can find description of the procedure, address of the nearest “fitter” with special devices or do it through online procedure (did not try).

The procedure is similar to the following. You must select the riding style (looks like in the choise the tilt will taken), the distance between the bumps of the buttock bones, measure the circumference of the thigh (upper leg, looks like it lead to dependance of the width and shape of the saddle nose) and to measure the parameter of lumbar flexibility with special device. 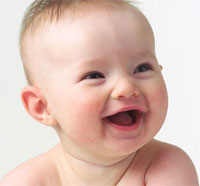 This causes to great respect, it seems that the manufacturer has provided everything, and the selected seat will clearly be “as good as it gets”. But the result is given as two (only!) width of the seat (S and L) and three options of flexibility (1, 2, 3), i.e. there are totally 6 options! It looks like a funny joke.

To determine that in my case it is S2 is possible simply by general view, without any humiliating procedures 🙂
By the way, on this saddle, and ride, and all happy 🙂

It’s Interesting also to compare the difference of  longitudinal profile for options 1-3 of Selle Italia, and make sure that the difference is not visible to the eye 🙂  But compared to some other respected manufacturers profiles of saddles Selle Italia are much more flat.

In general, I want to say that the longitudinal saddle profile – a matter of taste maker and user, if tastes the same, the “advice and love” – if not, the user or the need to get used to, or search for another manufacturer. Although the search results are unpredictable.

But I can not say that, and it’s not about me 🙂 As already mentioned we have 9 seats for two of us. With the exception of the first case of the seat change, the reason for furtehr replacements was to find a female seat that is compatible with 50-150 km of ride on asphalt (varying degrees of roughness) with the ferry of 10 km and more. 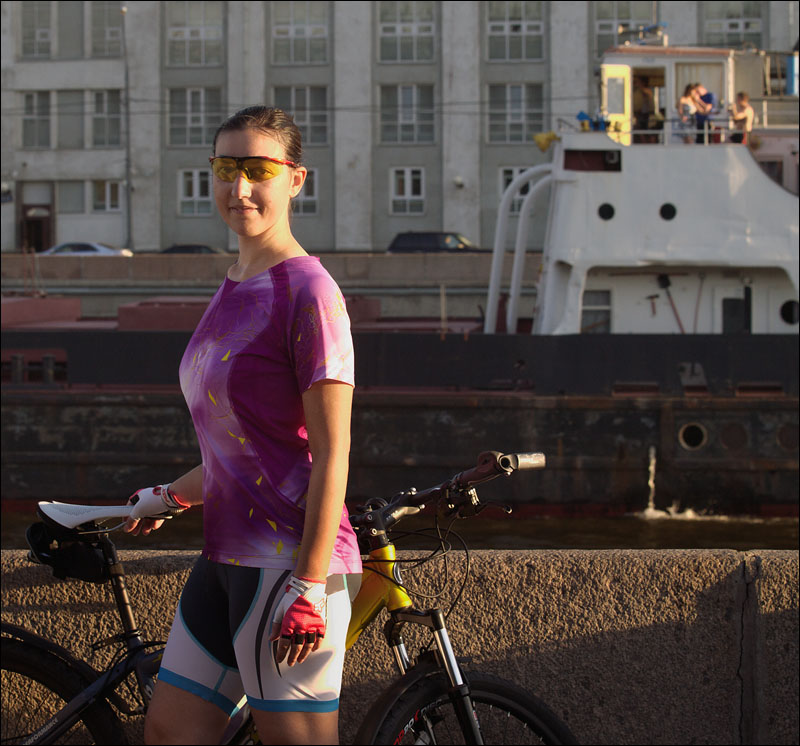 On the picture is second seat. Photographed after 75 km (there is still 30 km more) along the embankments of Moscow and Yauza rivers  (4 years ago). Saddle is special model for female, with a good accordance of width by preliminary measurements. Stiffness – medium. By the way flexibility in the lower back is more than normal. Saddle profile, as can be seen, quite straight. The saddle does not fit at all in spite of a reasonable period of adaptation. And the reason for this is a straight profile. I find it difficult to understand what guided the producers of saddles, but in our humble experience in the saddle profile for women (at least for the individual woman in the photo) have to be a recess. This is due to fundamental differences in the structure of soft tissues in men and women. Those. a distance between the ischial tuberosity in the women’s case not guaranteed at all the seat suitability. In men, however, too, but in the women – completely 🙂

In the next seat already with “concave” profile, I had yet to strengthen it and make the recess to recess. On road bike for the same reason it had to be replaced “stock” almost flat on the profile of the seat (and also not immediately, there was a hope 🙂 ). 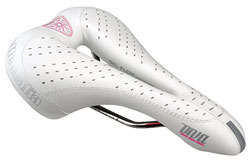 I have already choose the seat not by the “science”, but simply by the maximum number of positive reviews from happy owners. Normal flight, but without exaltations  🙂

In a conclusion we must say that, despite the huge variety of different longitudinal profiles of the saddle, is unlikely to apply some kind of system-science-like approach to the selection. All that is written or heard, unfortunately not much supported by common sense and my experience 🙁 However, the credibility of the accumulated by manufacturers knowledge certainly have, so for myself chose the option with the average of the longitudinal profile. I think as “the average temperature in hospital” it is most consistent to the ordinary man. In the casefor select the profile of women’s saddles, in our experience – only read reviews and try to fit feeling of these reviews to you.

And further to get used to, and when after three hours it becomes quite difficult to find a place to sit, try not to think that it could be better with other saddle 🙂

And briefly about the angle of inclination of the saddle with a expressed longitudinal profile. Flat seat usually take place horizontally. That is, if you want to lower the nose, it is necessary to try instead a little lower the saddle. And vice versa. And ride. You can of course and tilt, but after that it would be more consciously.

In the saddle with expressed profile often put horizontal across the seat as in the photo on the left, that is, as well as a flat seat. It is not right. It can be done only if it is specifically recommended by the seat manufacturer. If not, the horizontal line is exposed by the part of saddle before the rise the “wings” behind, as on two photos at the right.