The bicycle chain is part of the transmission, located in the open air. Therefore, on the one hand, the bicycle chain must be maintained in a lubricated state, and on the other hand, dirt adheres to the oil, turning it into an abrasive. It is best to solve the problem by placing the chain in a container that is protected from dirt. I saw this decision at Kickstarter, but it could not collect the funds for starting production. Therefore, we have to look for a compromise, as the producers of lubricants for the chain write about. That is, an oil is created, which is where it needs lubricates, while where is no need not attract dirt. I can not say that I tried many greasings, but those who came across still pretty messed up the chain. In the note I want to share usage of two liquids. The oil lubricates, and the paraffin film protects against dirt. 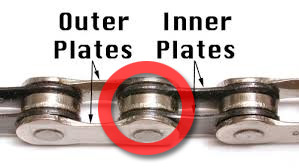 First you need to clarify where oil should be in the chain. The tearing and turning part of the chain link is in the joint. This so-called “pin” (axis), roller on this axis, and on the edges two plates of the links. All these parts rub intensively against each other and extend along the teeth of the sprockets. But outside this zone oil is undesirable, because it attracts dirt well.


A significant feature of the bicycle multi-gears (or in other words “multi-speed”) chain – the inner diameter of the roller is much larger than the pin (axis). That is, the roller on the axis is dangling. More precisely dangling not on the axis, but on the ledges of the inner cheeks. These ledges from opposite sides are not touching inside, there is a gap. Yes, gaps are and between the roller and the side walls, too, the slit is sufficient for easy penetration of dirt.

On “classic” chains, the roller is also larger than the pin, but between the roller and the pin is placed an additional sliding bearing, such as a bush.

Probably this design should be on single-speed bicycles. In any case, on the bicycles of the previous era, there were no special questions of caring for the chain. And of the replacement of the chain, as far as I can remember.

It turns out that the invention of the transmission system for a bicycle in the form of a large number of sprockets led to some “bullying” over the principles of chain transmission. In the note Easy bicycle cassette renewal, a “mockery” is considered over the stars, in which the tips are cut off. Now it turns out that the bearings are threw out from the pins, and instead of them placed containers for dirt.

So, the ability to switch gears is made at the expense of a mocking attitude to the resource of chain transmission 🙂


A little about the resource of the chain, because it depends on the lubrication. During operation, the chain is stretched. Most likely, the “fixing” of the inner plates on the axis became worn out. Stretching the chain is due to two reasons. First, and with this there is nothing to be done, just stretching, as the chain transmits effort. The holes in the inner plates becomes oval, and on the pins, a groove may appear (depending on the ratio of the hardness of the pin and the side-plate materials). The second reason is just simply abrasion of the pin-plate-roller contact with dirt and/or lack of grease. This is most noticeable when operating in poor conditions. Once I heard about the “mud” race around the lake for 80 km, which led to the need to replace the chain for all participants .

So, there is a space between the roller and the pin, which is filled with oil when the chain is lubricated. When the chain works the roller, as it “hangs” on the axis, churns the oil and squeezes it out through the slits between the roller and the sides of the links. The oil settles on the teeth of the stars, takes dirt and dust and then, already in the form of a abrasive substance, it is pushed with teeth through the same slits into the “container” between the pin and the roller. Therefore, the chain is recommended to be washed seriously. So that all this muck is rinsed away through the slits. It is believed that if the chain is removed, shoved in a plastic bottle, pour gasoline and shake well, then the dirt is rinsed. To be honest, I do not really believe it.

Next, you can argue a lot, but I think we need to dwell on the fact that there is a container between the roller and the pin, in which it is always desirable to have fresh oil. When the roller strikes the teeth, the oil is squeezed outward along with the dirt and adheres to the chain. Therefore, if the chain is maintained in a clean state, then the inner cavities will be washed rather than contaminated.


Gradually came to such chain maintenance. 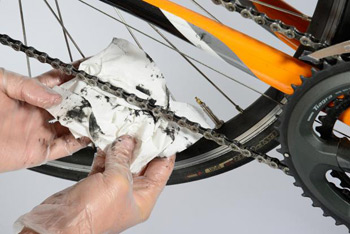 I support the chain in a clean condition. I simply rub it with a cloth, when the chain becomes dirty. Lubricate the chain “on-pins-only”, that is, one drop for each roller. After I scroll a few turns of the pedals (the rollers become dirty). 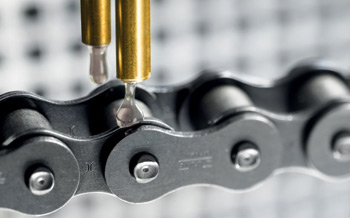 Then I wipe the chain again with a cloth, until it becomes  clean when it torses. There is nothing original in this, this is one of the ways of lubrication. In such procedure, the oil penetrates to where it should be and is removed from another places.

After riding or depend the dirt I wipe chain. First tim, after lubrication, “squeezed out” a lot of dirt, then less and less. And then, if the weather is dry, the chain remains clean. For me it is a criterion that the oil “in containers” around the pins is over and the grease needs to be repeated. Some use other criteria for the periodicity of the service: the sounds of the chain (whistle or squeak – I do not know exactly, I have not heard), mileage, etc. Wipe the chain is not very simple, because the mud-oil mixture sticks quite strongly.  You can sprinkle with some smelly spray before rubbing, but this does not work for me, because bicycles are stored in the apartment.

I have not written anything new yet, I just have to emphasize one of the possible approaches to chain maintenance. By the way, it is possible not to service at all, I have such experience, but from a some moment began to like very much clean chain and sprockets. 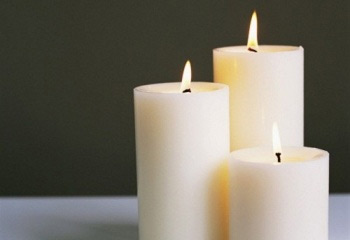 I must say that cooking the chain in paraffin is described in the network quite well. This refers to solid paraffin instead of oil. To do this, remove the chain and immerse it in the paraffin melted on the water bath. Slightly stir until air bubbles cease to exit from the “near-the-pins containers”. Then take out the chain, let the paraffin stiffen and put the chain on the bicycle. Mud does not stick to such chain, because there is nothing to stick to. When driving is a chirr sound as there is no oil. Mileage of such a chain with paraffin, but without oil and dirt is not less than with oil and mud. In the network it’s like a whole movement, I will not diminish its significance. I will only say that this method is not suitable for me because of two reasons:

However, the ability of paraffin to “repel” dirt and oil is good to use. There are, by the way, liquid lubricants for the chain with paraffin, but according to the reviews mileage noticeably less than usual, and expensive. In general, they are not widely used (yet).

It so happened that last winter, for the preparation of mountain skiing, liquid paraffin was actively used. Read more here: Ski tunning, know how. Liquid paraffin is sold under the name “liquid for ignition consist of liquid paraffins” in supermarkets, in the departments “everything for shish kebab”. The price is approximately 160 rubles per liter bottle (today it is 2.5 dollars per liter). Paraffin though and liquid, but dries up. In fact, in mountain skiing, strangely enough, we began to use it originally to repel oils-dirts. Therefore, from the beginning of the bike season, I began to try, how it can be used to make the chain less polluted.

Liquid paraffins are products of oil refining (as, however, solid paraffins). It is an odorless liquid, in which, by the way, solid paraffin does not dissolve (if without “dances with tambourines”). Sometimes, however, add a solvent. The “Forester” smells strongly of turpentine. Perhaps there are added and solid paraffins.

But this is more likely an exception, since the winter I have come across three more with the inscription “mixture of liquid paraffins”, and all were odorless, or rather slightly smelled like a candle, that is, just paraffin and “lightly” 🙂


Treatment of a chain by two liquids

At the moment such procedure has been worked out.

After the usual oiling of the chain with oil, more precisely, after the oil that was squeezed out was wiped off by the cloth, the chain is spilled with liquid paraffin. That is, two different liquids, oil and paraffin are used. I twist the chain, and spill the paraffin in the top by the bottle with a narrow nose, until the lower roller on the rear derailleur becomes noticeably wet. On the floor at the same time nothing drips, the paraffin is evenly distributed along the chain and the teeth of the cassette and the system. If it began to drip, it means that it spilled too much on the chain, but it does not affect anything. That’s all, wipe the chain is not necessary.

When after the riding the chain becomes dirty, then as usual it is wiped with a cloth and then again “spilled” with paraffin (sometimes through times). That is, such waxing does not in any way replace the usual chain lubrication with oil. Then what’s the difference? The difference is that the chain is much less dirty and much easier to wipe with a cloth, since the oil squeezed out from near-pin cavities does not so strongly stick to the paraffined chain.

Oil and paraffin simply complement each other.