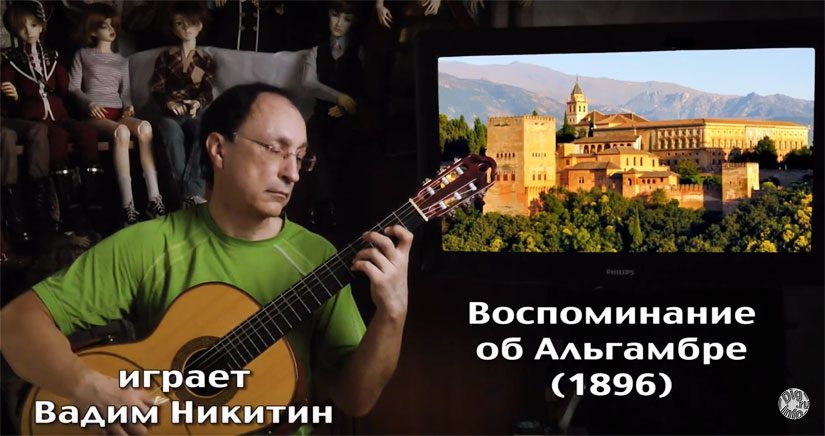 The history of the guitar has so far left only two significant works, which are based on the stroke of tremolo. This is “Memoirs of the Alhambra” (1896) by Francisco Tarrega (more known as RDLA or Recuerdos de la Alhambra) and “The Last tremolo” (1944) by Augustine Barrios. “The memoris of the Alhambra” I heard about 40 years ago, and was immediately shocked, because in addition to beautiful music, it was not clear how this can be done. Barrios for some reason came to Europe and to us only closer to the end of the 20th century, and his “Last tremolo” is not so known. Of course, there are other successful compositions on tremolo, but “Memoirs of the Alhambra” is perhaps the most famous. 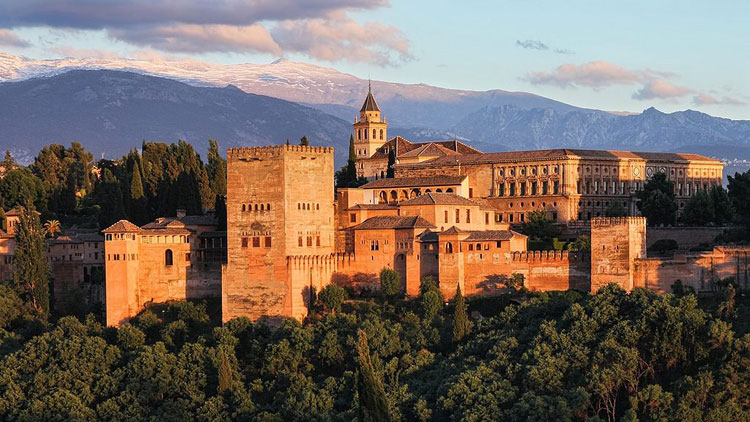 The Alhambra is a Moorish castle-palace-garden in Granada (Spain). Something like a small Kremlin. Built in the 13-14 centuries as the residence of the ruling family of sultans. Here is a top view: 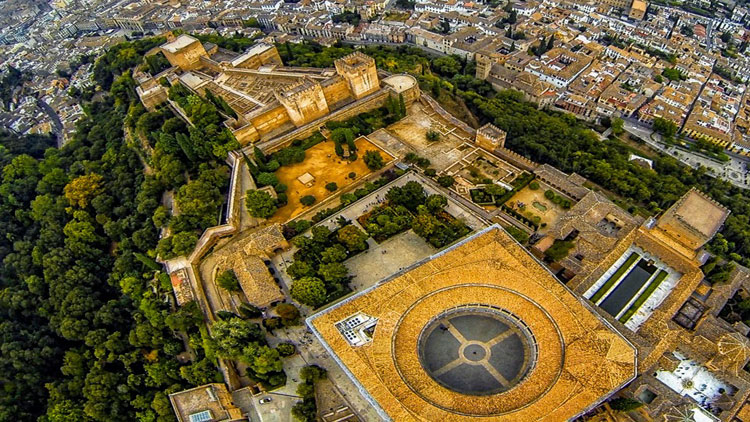 Not looks like defensive structure, which is strange, since from the point of view of history the Moors were already in a enemy’s environment: 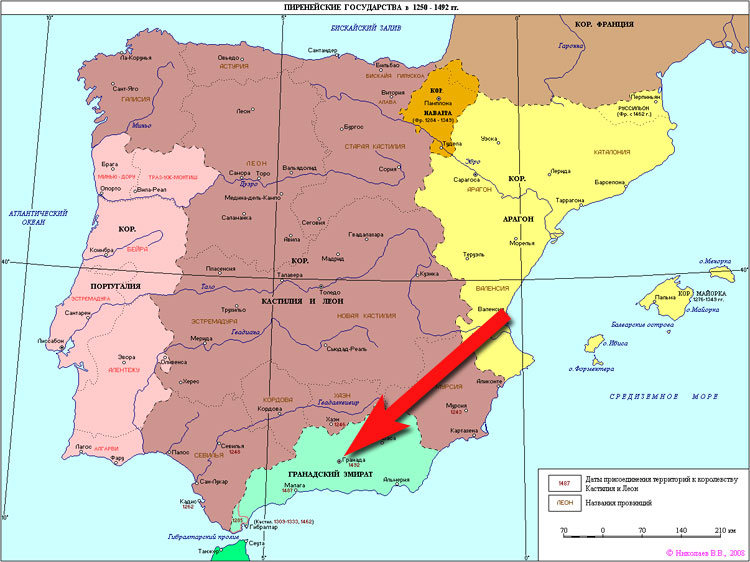 In general, in this story, the reconquest, that is, the liberation of Spain from the Moors, is in fact much incomprehensible. It is clear when good triumphs over evil, a higher culture prevails, the national liberation movement throws off the yoke of conquerors. The Alhambra immediately makes us doubt that it was all so. For example, what can you think of the evil Moors, looking at these walls? 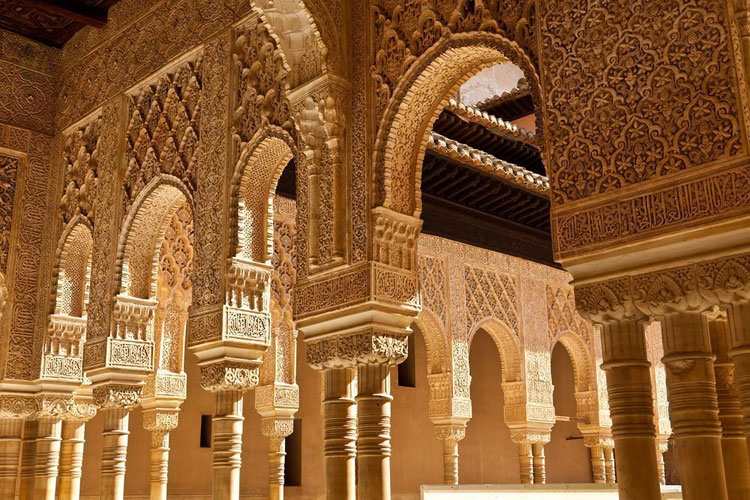 I do not want to go into history, just give a few facts. The rule of the Moors lasted 700 years. Is it too much to talk about the yoke? The name of the Moor-conqueror of the peninsula is the Strait of Gibraltar. The conquest of the peninsula was made by the joint troops of the Moors and Byzantines, who at that time were called Romans. Moors “dealt” with the Goths, who appeared on the peninsula just 100 years before, but originally lived on the Danube between the Germans and the Slavs. From this place they were driven by nomads from the east of the Huns (whose bright representative is Atilla).

In 1896, Alhambra was first visited by Francisco Tárrega, whose fame was already enormous by that time. 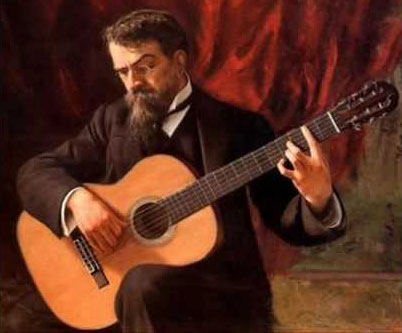 Strangely, of course, that Tarrega is best known now for the fact that the musical phrase from the work for the guitar “Grand Waltz” was used by Nokia in nokia-tune ringtone.

Judging by the pupil and biographer of Tarrega Emilio Pujol, the Alhambra acted on Tarragu approximately as described above. Culture shock. Immediately after this, the work “Memoirs of the Alhambra” appeared, which in my opinion conveys a sense of cultural shock. 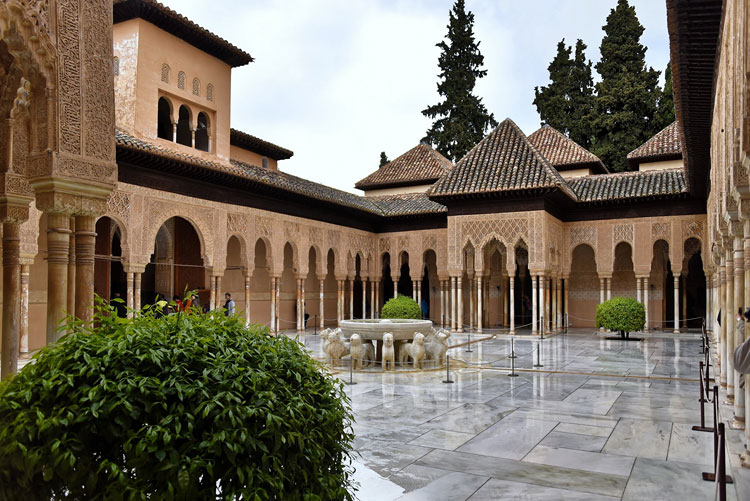 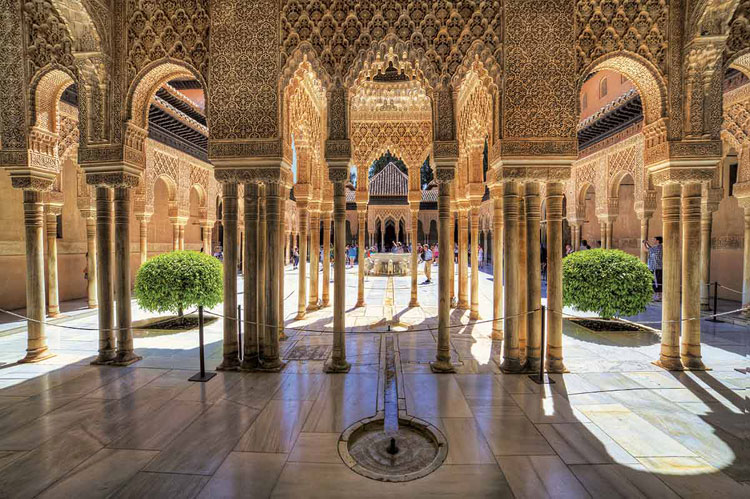 I heard the version that Tarrega was especially impressed by the abundance of cozy fountains, therefore he transmitted the sound of fountains in the form of tremolo. 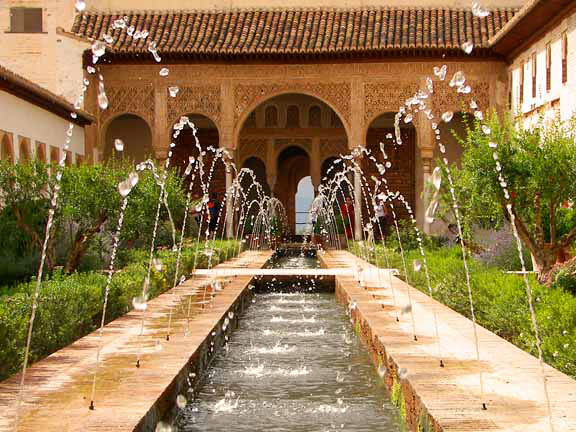 Honestly, I do not remember where I heard this work for the first time. But I immediately wanted to play. The teacher (Galina Iosifovna Vladimirova) gave me the opportunity to rewrite the notes. It was in 1979, 38 years ago. 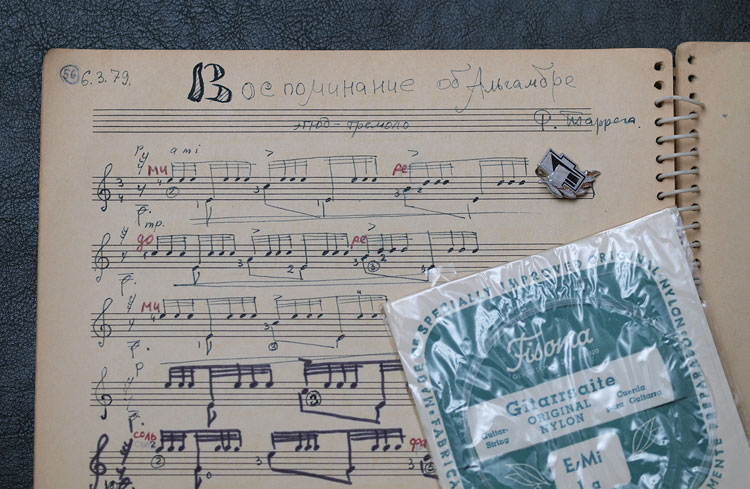 A little about tremolo. The thumb (right hand) plays the accompaniment and the second voice, and the first voice plays three fingers (unnamed, large and index) in a row on one string at a tremendous speed.

The work consists of approximately two equal parts in duration, minor and major, each of which must be played twice. I was play only only half of first part one time. Then my fingers began to spin, and then they all moved with difficulty. On the classical guitar by that time played one year. In principle, for tremolo year is too short. But the situation did not change much in a year. Within the framework of this note I do not want to talk about the tremolo more, I will only say that the level of technique passed through my “internal censor” only now. Although noticeably slowed down due to mediators Alaska Peak on the fingers instead of nails (for more details see:  Alaska Pik fingers picks, 2 years experience), to play tremolo by fingernails is much easier 🙂