Every day I play on guitar made by luthier Dieter Hopf, model “Artista Membrane” .

Every day enjoy the sound: deep basses and a bit husky voices. And every day, fighting for the purity of the sound of the first three strings. It is very difficult to achieve steady on volume sound and soft tones  – without a “nails dirt.” In other words – a big high-frequency component in the spectrum is present. As if you raise up trebles in equaliser of audio player. But the guitar – not audio player that pulls the recorded sounds. The guitar itself generates sounds. The same capricious to picking sound provide lively tones of all sounds, including basses.

In general, the responsiveness of the instrument – a rather important feature, depending on the choice of materials and art of master. But there are also objective features of the design. The thinner guitar deck, the more “bells” in sound. However, decrease the thickness of the deck is very risky, as the strings work to break the deck. The deck is also under stress by the structure of so-called springs – curved sticks, glued inside. Springs besides the stress of deck  make stronger total construction. However, the guitar work to wearout, so additional reducing of strength of construction is risky.

In guitar-building, as in other areas, permanent innovations take place. 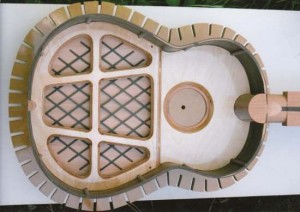 Luthier from Australia – Greg Smallman, significantly reworked inside construction of guitar – he was able to make deck three times thinner. One of the design features – the springs in a lattice. The sound of guitars type “Smolman” – rather peculiar, not all  performers like it.

“Artista Membrane” apparently designed under the same influence. It has an area on the deck – “membrane”. The thickness of the membrane – unknown for me, but when using the mirror for look inside, it was found that the membrane transmits light as a sheet of paper! To illustrate it I photographed guitar with fit flash inside. 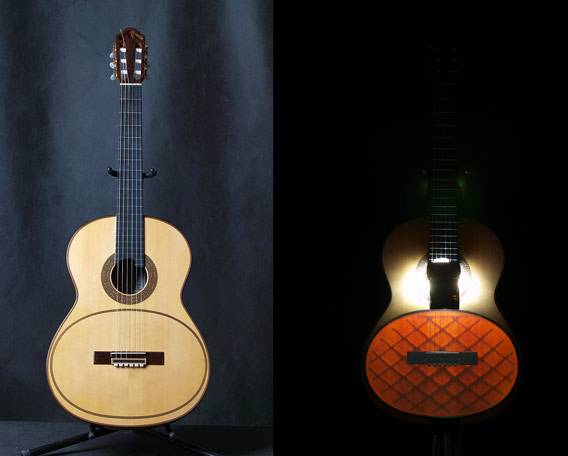 Here is some examples of records with exactly this guitar: “Guitar: top-3 by views”