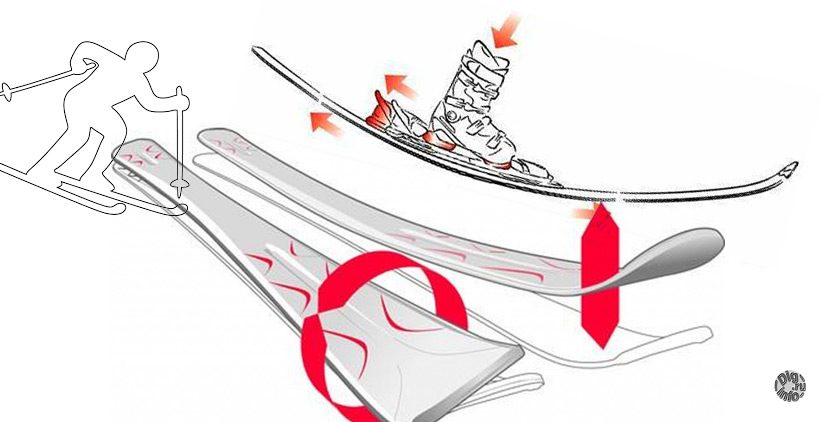 Stiff slalom skis go faster, of course, if you can control them. This is not an axiom, and indeed quite a controversial statement. But observing the trends of the past four years allows for such a conclusion. Let me clarify, this is not about the World Cup, but about amateur slalom 🙂

Stiff skis can be different: “like oak”, “shooting (at the end of the turn)”, “hard but elastic”. Soft skis are probably more like each other. Yes, and more friendly, easier to turn in and goes out of the turn without the “surprises”. The result of passing the slalom course is often determined by a couple of turns from a couple of dozen (slalom course in Moscow). Friendly ski usually allows you to go through key turns better. But a stiff ski can also be friendly. It is only necessary to neglect the FIS limitation of 165 cm (for men), if you cannot fully control skis with such a length.

The methodical observation of the increase in the stiffness of slalom skis of the class “club racestock” began with a note Atomic Redster FIS SL 15/16, become stiffer. 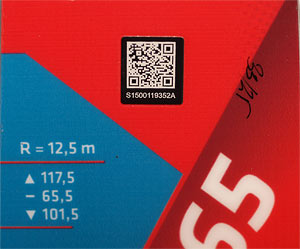 It concerned me directly, because before that I rode Atomics that were significantly softer (I remind you that on the racestock Atomics, the rigidity of the skis is written at the factory with a felt-tip pen on the top of the skis).

Before this observation, too, were, but not methodical. 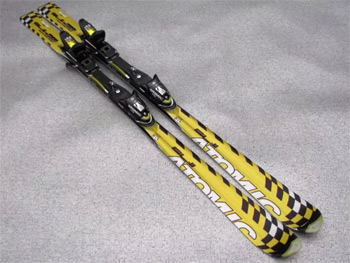 So for about 10 years before, I also rode on the racestock Atomics and was very pleased with them. But when it came time to change the skis, it turned out that the Atomics became stiff and oak-like. So much that colleagues at the club, massively jumped off the brand. After a couple of years, Atomic abruptly returned softness to the club racestock, and after a few more years I returned to the classy soft Atomic.

Therefore, the fact that the Atomics again became tougher, puzzled me. But everything turned out to be not so scary, they became stiffer not much, and, most importantly, remained “elastic”.

It so happened that I had to “jump off” from these Atomics to Ogasaka 2015, which are about the same in hardness as Atomic (which “have become stiffer”). Read more here: Slalom skis Ogasaka Triun SL. So after this I methodically monitored the stiffness of slalom skis from Ogasaka.

The 2016 Ogasaka for rigidity was the same as the 2015, while the 2017 Ogasaka became significantly tougher. A detailed comparison of the Atomic and 3 model years of the Ogasaka is here: Compliance ski sidecut shape to deflection. Part 2.

The Ogasaka of the next, 2018, has become even tougher, and again with a change in the concept of deflection, and change of sidecut.

That is, the trend is clear. I waited for the model of the next (2019) year, I thought it might return softness back, but no. The concept of skis remains the same, that is, the manufacturer believes that now slalom skis should be tough.

I do not have similar measured data about slalom skis “club racestock” of other manufacturers. But subjectively, those skis that I’ve tested, too, became tougher. It is interesting to note the “splitting” of the club racestock at the Atomics into “just a club” and “a cup”. In the snow, “just a club” feels about the same as I had (2016 model), and the “cup” became tougher and more stable. But this, once again, is subjective.

Sa, as there is no way back, I had to look for the advantages of hard skis. Perhaps the main advantage is stability. This was immediately noticeable when testing in free skiing (not at the slalom course). About testing ski Ogasaka on this site there is a series of notes. Stability and “rail” hard skis, even on a bad snow was noted by almost everyone. In the slalom track, such stability is also needed.

Here, for example, how behave soft skis (according to today’s standards) – Ogasaka 2015. Animation GIF made on the basis of a piece of video from Polina Nechaeva (thanks!). It is necessary to pay attention to how skis are vibrated. Honestly speaking, it’s not necessary to talk about cuttinf the arc, since there is no contact the edge over the entire working length 🙂

Obviously, such a “squishing” of skis leads to additional braking. Therefore, increasing the rigidity of the ski should give an increase to the speed on the route.

Now about the minuses of hard skis. I mean, nevertheless, not “oak like” skis, which do not turn at all, but rigid skis, which are “hard but elastic”.

In the free skiing a ride just a pleasure, they cut the slope as irons, even if the state of the slope is complex, such as mix of ice and soft snow.

On the course with my level of skill there can be serious problems on hard skis .

According to the internal sensations during the edging, I simply did not reach snow by the middle of ski. Therefore, immediately had to “scrape.” This is certainly not a ski problem. To bend ski it is necessary to use own weight or/and skill for use acceleration for gain force toward the edge. It is necessary to mention that on our small hills we still ride at lower speeds than in the mountains, so it’s more difficult to bend skis.

The second minus of hard skis is associated with a carved, but non-carving turn. The turn, which was the main one on classic skis, and in carving ones, “stands as reserve”. 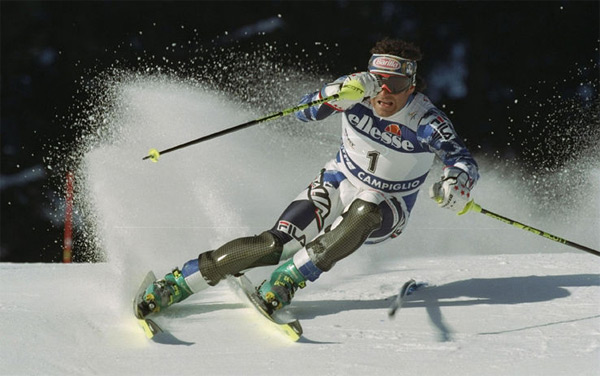 In classic skiing, after the edging, it was necessary to load tips sharply. On the tips of the ski is wider, therefore at the time of edging the grip with the slope is mainly in tips. When moving the body (or knees) forward, the edged ski rested on the tip, bent and lay down on the slope with the whole edge with the bow bent in an arc. And turned sharply. Then it was necessary to roll the ski so that the back part would also be bent in an arc, but this is not so necessary. 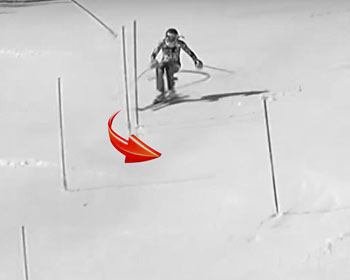 Such a turn on modern skis becomes main when exiting vertical figures (hairpin and snake). Vertical figures are traversed in a higher position of body (because the trajectory is almost without turning), and the exit can be quite closed. Move the body down, as in the usual turn you can not make it. Therefore, the most reliable is to load tips and work like on classic skis. Soft skis in this situation have a significant advantage.

At the end of last season I had the opportunity to try hard slalom skis 155 cm long, more details here: Ski Ogasaka Triun SL 18/19. Their overall rigidity is the same as that of my “soft” skis 165 cm long. That is, they feel on the course in the same way, there are no problems “to reach” a snow or, as mentioned above, to get out of the vertical figure correctly. But in the track, it remains of course a tough ski, sock “does not squish.” This season, timing showed on these skis go much faster than on softer, but longer skis. Here is the run at competitions on Ogasaka Triun SL (2019) 155 cm.

Thus, if a skier deflects “hard but elastic” slalom skis, then they will certainly make it possible to pass the course faster with the same level of skill than on softer skis. Due to the fact that there will be less parasitic flexion-extension of the ski. In addition, there is a possibility of a denser trajectory, because the toe of the ski is less “squishing” and therefore the risk of grabbing a gate is less. In addition, snow traction increases due to the fact that the ski is more consistently lay at snow.

And if the skier does not deflect “hard, but elastic” skis, then you just need to take the skis shorter! Let me remind you that this is an amateur sport that is not heavily burdened with the requirements of the FIS. Yes, and slalom courses in Moscow are installed on the slopes, which are better not to compare with those on which the real alpine skiing competitions are held 🙂