In this note I want to give some tips for & tricks for skiing in slalom course. Behind general considerations, theory, exercises there are also specific advices that can help immediately. I’ll give three slalom skiing tips & tricks that really helped for me in this season (2017). 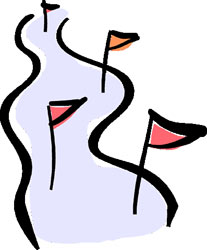 Need to say that such advices are very personal. What is good for me-today may be not have been useful for me-past or could not help for other person 🙂

Put here some references to notes with a more wide considerations of what will be discussed.

Bricks from basement of ski technique – sections about the “layered cake” as model for bad habits that previously laid down try to rise up. And sections about “carved turn” and “drift” as necessary components of the turn in slalom course.

Slalom, training of adults – a section about the “burnt maximum speed”, which limits the use of technique. So even technique allow ski faster you can not ski faster then “fixed” in your mind.

Slalom, work on technique in the season 2016. Trajectory  For the trajectory, you can only easy feel only extreme cases – too closed or too direct. And finding optimal trajectory is “work of art”.


How to see the course for several gates ahead 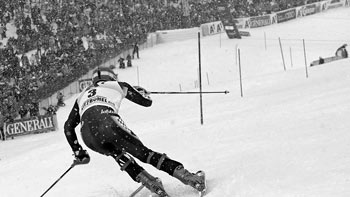 You need to see the course a few gates ahead. This is an indisputable fact, but I’ll still say a few words why.

Firstly, if you look only at the nearest gate, you can get lost in the figures. Even if you carefully watch the course before race, when you go, everything can be looks in another way. Even if you do not get lost, you can miss the beginning of the movement.

Secondly, in order to build arcs “on the fly”, the arc should not end at the gate, but mate at least with the next arc. Otherwise, all the arcs will be “like the last time”, and the movement will be a small variation on the theme “I’ve reached the pole, uh, brake and look where to go next” 🙂

Thirdly, everything is much deeper. 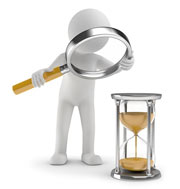 The psychiatrist Vladimir Levi in his popular literature has the concept of “Actual Image of Event” (AIE). This is a mental image of an event that has not yet come. So everything is arranged, that the construction of the AIE significantly influences to the achievement of the event, both the fact itself and the speed of the onset of the event. Therefore, the construction of the image of yourself, running a few gates ahead positively affects to you present, catching up the image.

Advice. Actually I do not know how far ahead I see the course. Precisely at least two gates, and in the scanning mode, that is, the trajectory to the nearest pole in all details (especially if bad coverage), and what awaits next. But I find how to look ahead definetly on several gates. And how to take nearest gates with the “autopilot”. 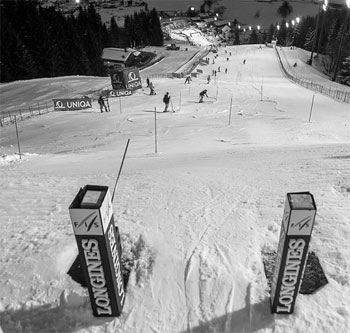 In the start gate look along the first several gates (for example, I tried five gates) and fix the sight on (say) the fifth gate. Record to memory this visual distance. Now start to ski, without approaching the sight, which now sees strictly on the 5 gates ahead. If it turned out, then the “unusual” reduction in visual distance begins after the fifth gate before the finish, because the fifth gates ahead is not exist either, but you are still going.

Honestly, I do not like the result yet. The trajectory immediately becomes  too straight, it seems that it is far from the fastest. That is, seems I still need “scanning” to nearest gate also. But I know for sure that I can watch exactly 5 gates ahead!

To this topic adjoin the memorising and the mental passage of the course. On broadcasts from the World Cup often show how the athletes mentally pass the track before the start, making the appropriate movements of the hands and body. Do I need this for 20-gates slalom in Moscow, when the entire track can be seen from the start? Probably not harmful. I’ve tried. Not very satisfied because I can not calculate how fast I will go. And ever worse. Attempt to imagine pass the track leads for me to a slow-motion show. I think it is not good to create such a slowed-down “Actual Image of Event” 🙂


Formation of trajectory from working section of the arc

As already mentioned (once again I give the link), the trajectory can be too direct or too closed. But it’s not even so important the length of the path, but how much you can squeeze out the arc, how much force can be applied in the first (accelerating) half of the arc and how much you can keep the trajectory in the second part. The main difficulty for me is that I do not know exactly how the skis will turn when you load them. This leads to two extreme cases, of which it is not known what is worse.

That is, either too directly went to the pole (guideline to a reliable pass of the route), but then you can load the ski only just near the pole, and the main pressure will come after the pole, which will lead to braking or drift of the heels.

Or vice versa, you can follow the advice “do not be afraid to go far from the course” and then insert a piece of cross descent to the pole, which also follows the advice received from the coach last season. But skis at the same time, too, are not loaded. Just fly away from the track, then land and come back. Nothing the same as “shorten the arc” (for more details, see Slalom, work on the technique in the 2017 season. Shorten the arc).

The Internet writes that everything should be simple. It is necessary to drive a carved turn on the edges and adjust the trajectory by changing the edge angle. This sounds to me like “Volga flows into the Caspian Sea” very correct, but there’s no any advice in it. 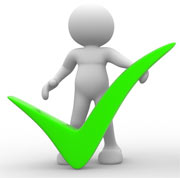 Advice. Realised it during the “week of the giant”. We trained the Moscow-giant, when the distance between the gates is 24 meters while the wideness of course is small, for the skis with sutecut radius 27 m. Speed was gained fast, gates flashed quickly. What was good, (above two) extreme cases did not work. If you go too straight, then on the third gate (out of only eight) you do not fit in course anymore, so you must go into drift and the speed was irretrievably lost. Of course you pass, but it’s bad. If, on the contrary, you leave out from the track too much, this leads to a too sharp turn, which skis do not carve out under these conditions. Again, the arc (and speed) is lost.

In the end, the optimal trajectory was found, along which the skis were carved sugnificant part of the arc. And just then it was discovered that it is possible and vice versa.

You can well know the “favorite” arc, which skis will go at the given ratio of the angle edge and the pressure. Next, you just need to build a path so that this arc was included, start with the beginning of turn and end near the pole. After this carved part of arc you need to smoothly decrease the pressure, change edgest,  go to the beginning of the next turn and again load to “favorite” arc.

I has transfered not this experience to (usual short)  slalom yet. But looking forward to the next “giant week” 🙂

The advice I’ve heard from Alexander Mityakov. At the exit of the vertical gate, you need to make a dive to a double-pole. On the internal sensations you almost hit the double-pole by head, but the main thing certainly sharply to load tips of skis, even overload. Then the skis very well come out of the gate with a steep curl.

There is nothing incomprehensible here. In the vertical gates, the skis go almost exactly down. Speed is gained. On the exit you need to wrap the last double pole of the figure without pre turn. Dive forward quickly loads the front half of the skis by unloading the rear half. If the skis were going across, it would lead to a drift of the heels. 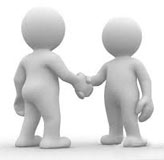 But the skis go exactly down, so there can be no drift of heels. And the overloaded shovel bends more than usual and takes out into a next turn. It works great. Rode in the season up to automatism. Alexander, thank you! 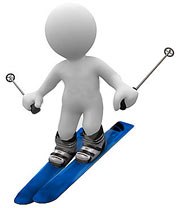 I have no tips & tricks for this yet, but there are usefull observations.

I noticed that the technique and time-check of passing the course is like quantity and quality. Technique is gradually increasing, while “relative to others” results in competitions or “race-training”  do not change much. And then suddenly there comes a jump for a second on the 20-second course. It seems that the quantity has transfered into quality. But then the owner of this new quality can sometimes ski badly, but the time will remain “new” 🙂 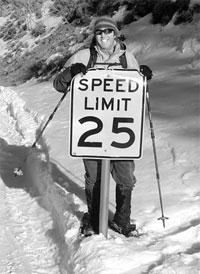 That is, it seems more like he just begin to ski faster, got used to the fact that the gates “flashes” with more frequency 🙂

For now, unfortunately, there is nothing to say, I expect this jump of the season three … In general, I do not know how to raise the speed barrier, when the technique clearly already allows it to be done. But there are a couple of observations.

First, the barrier does not rise in the course. It is checked very simply.

We often go the course with time check (for more information, see: Self-study slalom trainings). Of course, when the stopwatch “knocks”, then you go first run at maximum speed, and in the next runs you try to “jump above your head”. So, at the time of passing the course, it does not affect 🙂

In general, you need to increase acceleration in the first place, and speed as a consequence 🙂
Then the threshold of the “burnt” maximum speed looks can rise. And maybe not, I do not know yet 🙂 Alexander Mityakov believes that we just need to watch more ahead, but it did not help for me.