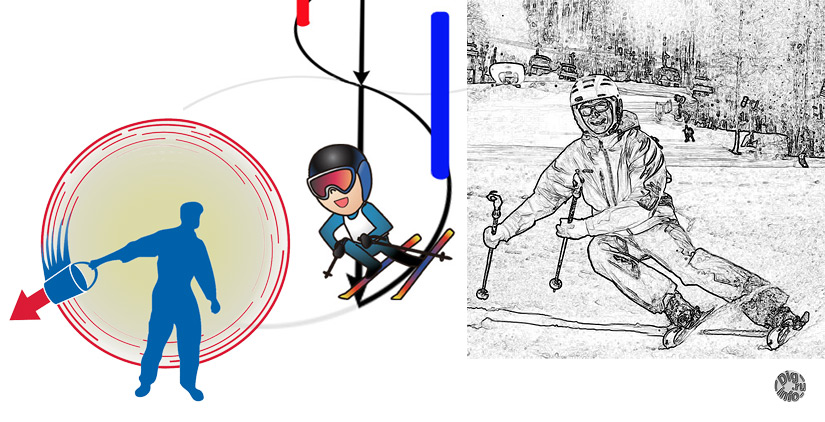 I want to share an observation that can be attributed to a brick of skiing technique. The code name is “skis to sideway”. Everything is very simple, if you want the skis in a turn were moved to sideway from rushing down body, you need to throw them there, and then, accordingly, pull them back.

“If you want” is an important clarification. When free skiing, it is not necessary to throw skis to the side, they themselves will move as far as necessary to equalize the acting forces. But when this technique is transferred to the slalom course, it turns out that the skier “stands above the skis”, his typical edge angle is 30 degrees, the maximum is 45 degrees. If you want, you can skiing on slalom course anyway, and even perform well in amateur competitions. But if you want to go to the edging angles of 60+ degrees, then, along with other techniques, you need to make sure that the “unnatural” throwing of skis sideways becomes a habit. 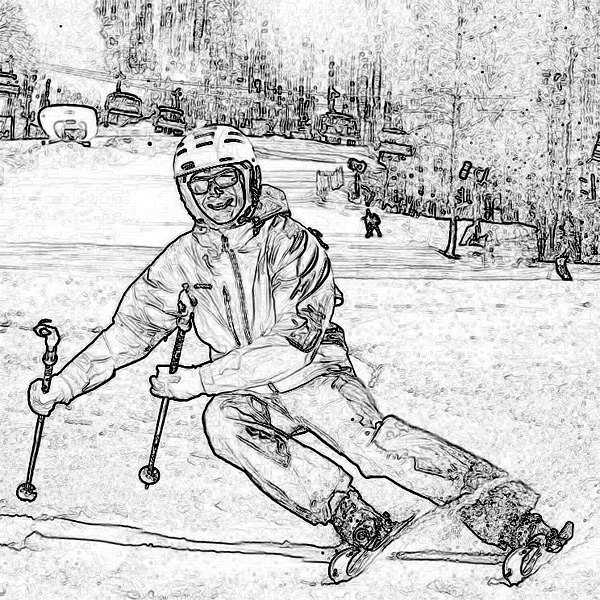 The increase in the edging angle is the result of many tricks that complement each other. I recommend that you read two notes: “How to increase edge angles in ski turn” and “Ski loading in exactly down phase of turn“. These notes analyze how you can go ahead from the natural edges of the edging, moving the body in and down, but at the same time so as not to fall.

However, there is still a very simple objective rule. In order for the skis to move sideways from the body, it is necessary that they go around the body in a circle (when looking at the skier from above). Therefore, they go a greater length during the turn and, therefore, the skis must move faster than the body. And if the speeds of the skis and the body are approximately the same, then the skis cannot move away from the body (the skier “stands” above the skis). Let me emphasize once again that there is nothing bad with that. Almost everyone skiers like this and enjoys it. And many amateurs ski along the slalom course like this and are also happy 🙂 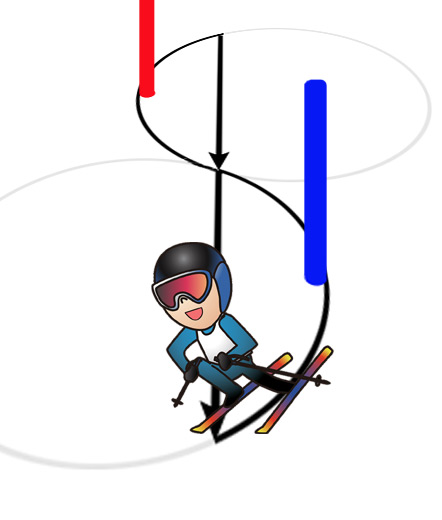 Consider a slalom course set up so that the body can move in a straight line downward, and the skis would go apart from the body a length of leg, say 1 meter. That is, the course width (lateral distance between the poles) is equal to two (1 + 1) meters. Between the poles, the skis pass under the body, then move 1 meter to the side near the poles, then they come back to the body again. The skis go a greater length in the same amount of time as the body and therefore must move faster.

Let’s say the longitudinal distance between the poles is 10 meters. The skier goes through a turn at the typical hobbyist speed – a turn in a second. That is, the speed of the hull moving down the slope in a straight line is 10 m / s (36 km / h). The radius of the circle along the arc of which the skis are going is 13 meters. We will not compare this radius here with the radius of the sidecut of the skis and the required edge angle. But calculate speeds. At the point of intersection of the trajectories of the skis and the body (skis under the body), the difference in the speed of the skis and the body is maximum. At first glance, the speeds at this point are not very different. At a hull speed of 10 m / s, the calculated speed of the skis is 10.7 m / s. But the transverse component of the speed (sideways ski speed) is 3.9 m / s (14 km / h), and this is the speed of a running man. It turns out that in order for the skis to move 1 meter away from the body during the turn “just down the slope”, you need “run” to sideway at the beginning of the turn. If you do not run to sideway, the skis will not move 1 meter away from the body! 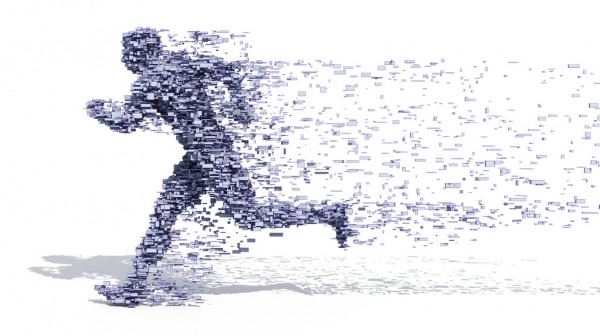 The transverse speed is maximum at the point “ski under the body”, then it is equal to zero at the point “ski down”, then changes sign (skis go to the body). It is a bit like tossing an object up. At first, the speed is maximum, then it decreases while the object is flying up, then it is zero at the top point, then it changes sign and the object falls. This is due to the action of gravity, which manifests itself in the acceleration of gravity g, equal to 9.8 m / s ^ 2. Let’s estimate the lateral acceleration of skis in the considered turn. Acceleration changes from 9.3 at the “ski under the body” point to 7.7 at the “ski down” point. That is, the force acting across is approximately equal to the force of gravity! Therefore, not only do you need to “run” across the slope, you also need to jump to the side, with the same force as when jumping up. Otherwise, the skis will not move 1 meter away! 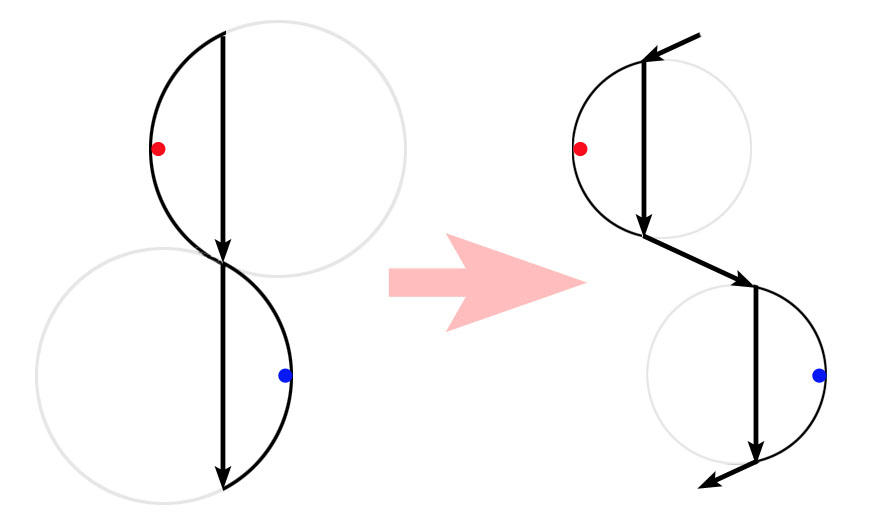 If we assume that the skier is going slightly accross the slope inside the corridor, and at the corridor wall the body goes down and the skis continue to go sideways, starting to draw an arc, then the following parameters are obtained. The radius of the ski trajectory is 6.9 meters (by the way, the corresponding edge angle – 56 degrees, which is quite consistent with the extension of the legs to the side by 1 meter). The transverse speed of the skis at the wall of the corridor (that is, at the beginning of the arc) is 5.3 m / s (19 km / h), the acceleration is 18.6 m / s ^ 2 (2g). Let me remind you that this is at an amateur speed – a gate in a second (turn in a second).

Legs to the side could be achieved in a variety of ways. I will share two techniques that I trained in this (2021) season. The first move is just for throwing out the legs. For myself, I called it “rotation a bucket on a rope” around the body. The second technique is needed in order to “return back” the legs thrown to the side. For myself, I called it “pulling the legs” to the body.

Rotation the bucket on the rope

So, we are going in the phase of an oblique descent. At some point, you need to throw the body down along the slope while the skis to the side. In general, this is an unstable state, which each organism experiences in different ways, depending on the acrobatic giftedness. For example, my body protests and therefore deceives my head. There are options to overcome. This season I liked this option. 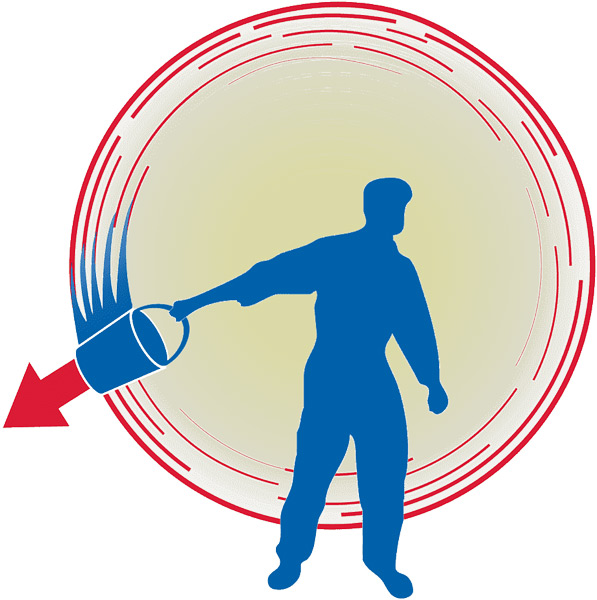 Throwing the legs to the side is not done like this “I will throw it away, then I will figure it out”, but immediately leads to the movement “untwisting the skis around the body like a bucket on a rope.” That is, the skis need to be “pushed” to the side and this movement should immediately begin to be redirected down the slope by “rotation the bucket”. Do not rely on the edge and sidecut angle to push the skis into the only correct arc. You define the arc regardless of the skis, simply by unwinding the “bucket”, or rather skis on your feet around the body. And let all sorts of arcs be cut out themselves, if the skis cope (because high technologies are concentrated in them). If not, let them scratch. The untwisting goes to the line of the slope fall (abbreviated as LSF – the direction when the skis are going straight down). Then the rotation can be continued, but not so much. And you can hang a little, in the phase “going straight down”, if the balance allows. There is no problem with the turning phase after passing the line of the slope fall, when the skis return to the body. But at this moment it is not harmful to pull up the legs to the body in order to “raise” the arc (up the slope).

Leading exercise. In a free skiing, you need to endure after passing the LSF, when the load on the skis and legs begins to subside.

After that, you can change edges. There are several options for it. Most often, the body is carried over the skis. And if you wait a bit, then the skis will go up the slope relative to the body by themselves. This is the effect that needs to be strengthened.

If in the phase when the load has decreased, pull your legs under you, up to “squatting”, then instead of transferring the body through the skis, the skis pass along the body up the slope (in the internal coordinate system). Re-edging is quicker and safer for the knees (!!!).

That is, instead of waiting for the skis to start to go (in the internal coordinate system) up the slope themselves, you need to pull them towards you (from the bottom up, along the slope), while squatting, as it were.

On the course, it is not possible to wait until the load begins to weaken, so you need to pull up your legs immediately after passing the pole. I still have problems with this feeling, it is quite possible that pulling up on the track will not be noticed at all. But some senses of the exercise in free descent must become a habit.

When exactly to throw skis sideways?

As soon as possible after passing the LSF! The turn should be completed at the pole, in the internal coordinate system you should go to the pole across the slope.

Having approached the pole, you need to “push” the skis into the traverse, in any case. And be ready to catch them “over” the next pole. That is, put into the place designated in this way. If you don’t know where exactly, then just as high as possible.

In other words, the skis are thrown sideways not in the middle of the corridor, but earlier, at the end of the previous turn.

Quite often, at the end of the turn, there is no time to throw the skis sideways. Therefore, there are two points to indicate the movement “now ski-sideways”. The first is at the exit from the turn, when the skis are redirected from a downward movement to a sideways movement towards the body. That is, near the pole, either a little before or a little after. The second point – when you reach the point up the next pole, you prohibit further movement of the body to the side, throwing it “down the wall of the corridor,” and throw your skis sideways. Sometimes it turns out to designate both points, sometimes only one and, of course, most often not a single one 🙂