Traditionally, it will be about the top slalom skis Ogasaka Triun SL, this time the 2019/20 model year (hereinafter I will call this model year as 2020). Judging by the catalog, the geometry of the skis has not changed, that is, the same as on skis 2019 and 2018. Therefore, the expectations were, like last year, the ski will remain the same. However, the test on the snow showed a noticeable difference, and for the better. Skis have become more tenacious and active. The difference is really small, but noticeable. According to information from Iwamoto san Ogasaka engineers reworked the design of the tip  of ski.

The first impression of the skis is color, impressed as soon as I saw the skis in the first photos.  This azure color of the idealized “cartoon” sky immediately worked as “I want” 🙂 However, I could be mistaken about the name of the color 🙂

Azure color is a pure shade of blue, which can be attributed to the turquoise gamut. Its main difference from turquoise – it is not an intermediate shade between blue and green, it is completely directed to the blue side. 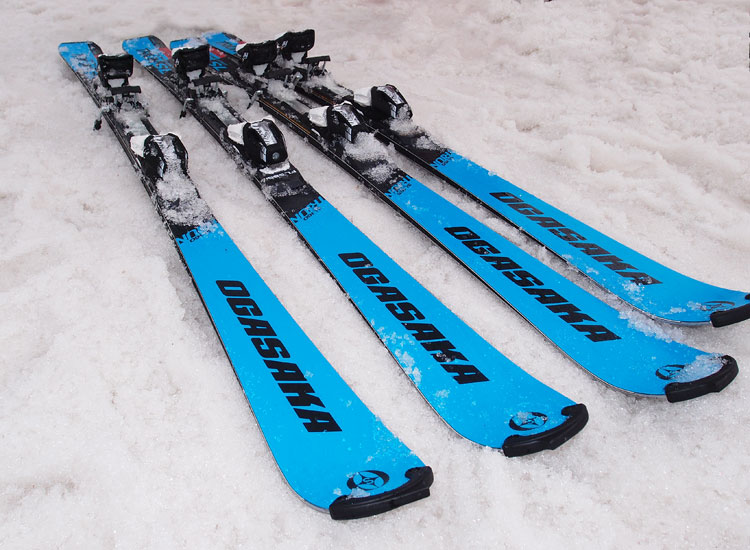 This time, Iwamoto san brought a 165 and 160 cm ski for testing. We were lucky to catch the last working day of our ski resort to test it on the snow. 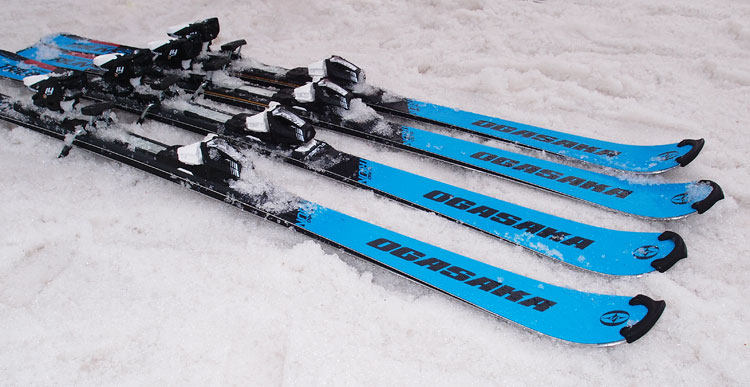 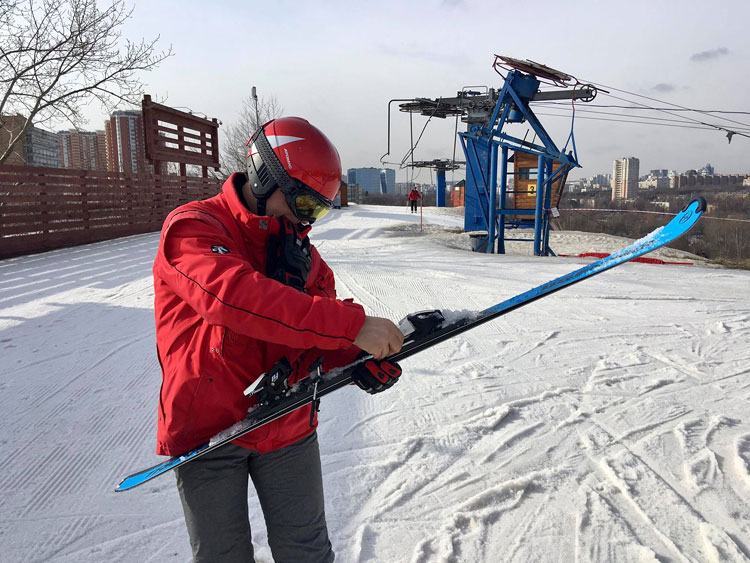 The impression of the skis (now not about color, but on skiing) was very good for everyone.  In general, skis are just as stiff as the previous ones (2019 and 2018), but more dynamic. More edge grip in enter of the turn and sometimes shoot off at the exit of the turn. Alexander Mistryukov and Alexey Yolkin (top skiers of our club)  immediately began to adjust the position of ski bindings to their style. Moved more than a centimeter back from the label, then return back, then moves back again. Sergey Akhmanov, who has skis of the 2018 and 2019 in his collection, did not declare much difference to the new skis.

My impressions are generally the same, except I didn’t notice that they are “shooting” (that is actively throwing me at the end of a turn into the next turn). Probably a matter of skill level. But it was clearly easier to bend the skis in the turns. They were much better clinging tips, and then the ski was drawn into a turn and held the arc securely. However, when hypothetically transfer the excitement of free skiing into a slalom course, I realized that skis 165 cm are still too stiff for me. But the 160 cm skis were very suitable in terms of overall rigidity, the same as my 2015 Ogasaka, 165 cm long and Ogasaka of  2019, 155 cm long.

I turn to the catalog data, in comparison with the skis of 2019.

Or with the help of Google translator:

F.R.P. – high-strength polymer fiber (introduced into technology in 2013), ZTC – zero-stretch carbon fiber (2014). But what is a “special rubber sheet”, which appeared in the design in the skis of 2018, is even more difficult to understand 🙂

Curve of cutout measured in 1 cm increments, pasted on the slider surface of ski marked masking tape, readings taken with a caliper.

FIS Calculator provides a radius of 11.66 meters. Let me remind that for the ski of 2019 calculator gave out a of 11.70, and that for a ski of 2018 was 11.69. This is a very good coincidence. As I showed in note  Ski sidecut radius and radius of a circle, the calculated radius very much depends on even a small wear of the edges. 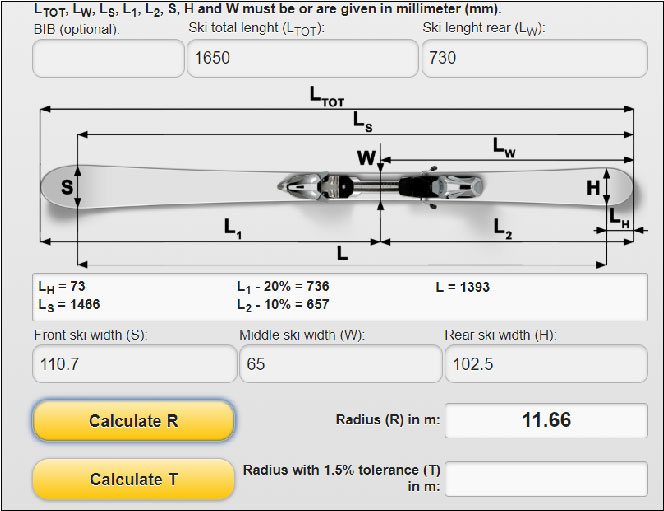 The stiffness and shape of the deflection measured on the same stand as in previous years: 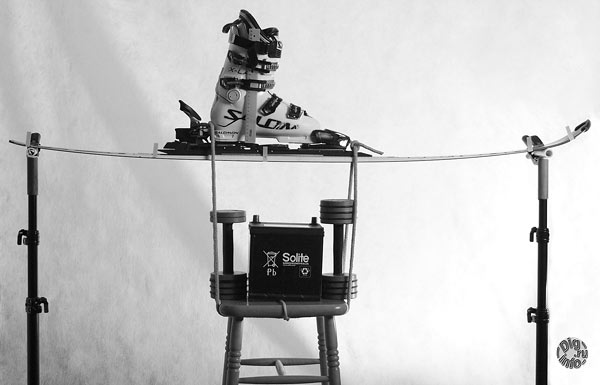 The zero point of weight was taken as the weight of the ski with the platform and bindings. Then the load was added: 5.7 kg weight of the boot + tooling, and then in portions of 5-6 kg to 29.8 kg.

On the graphs for skis 2020 and 2019 the position of the supports is the same. Thin horizontal lines are drawn through every millimeter. It is seen that under the load of 29.8 kg, the ski of 2020 bends 2.5 mm less. Nevertheless, it is wrong to assume that the 2020 ski is more rigid, since the “span” of the deflection between the minimum and maximum loads coincides and is 27 mm in the middle (at the line of the middle of the boot), the same for 2020, 2019 and 2018 skis. That is, the 2020 ski is placed “higher” on supports, or in other words, it has a more “camber” – so the tip and tail, press more to snow on small loads. Maybe this is the reason for the marked edge grip on the snow compared to the skis of 2019.

It is interesting to distract supports from the position of the skis and compare just the shape of the deflection. That is, in general, remove the supports from the charts, and reach the alignment the graph of bends of skis 2020 and 2019, lowering one graph by 2.5 mm.

Here, the graph of the deflection of the ski in 2020 is shown clearly and with a shadow, and in 2019 pale in the background. It can be noted that the deflection of the ski tip has really been reworked, and this is noticable at low loads, up to 17 kg. At high loads, the deflections coincide. Interesting idea. A rocker (a small lift of tip) makes it easier to enter the turn, and then the tip immediately begins to be pressed against the slope. In general, it coincides with the sensations in the snow.

It should be noted that the measurement of deflection is static. On feels looks like the ski of 2020 has become more springiness (maybe the “rubber sheet” is thinner?). But in static measurements on the stand it is impossible to measure.

In my opinion, so good skis. The colors are beyond praise, I can not imagine what can be better. Active behavier of skis is similar to the style of Ogasaka skis until 2018.  It should be noted that it is desirable to install bindings with the possibility of moving forward or backward. The skis of 2019 and 2018 were indifferent to the shift of bindings (in small values, of course) 🙂 And the previous models were very sensitive. Alexey Yolkin, during testing said that, as a rule, at the beginning of the season he puts the bindings on the mark (of skiboot center), and then gradually shifts back. More information about the shifting of bindings here: Move binding position forward or backward. 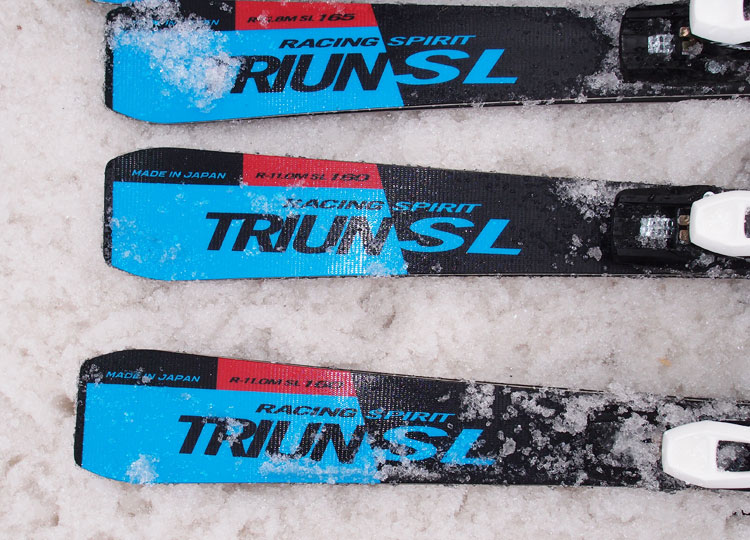 Alexander Mistryukov won on these skis (Ogasaka Truin SL 2019/20 165 cm) the stage of the Rus-Masters Cup (in the Urals)!

Or a more precise name: X stage “Abzakovo Cup”. Slalom
Ski Center “Abzakovo”, April 5, 2019. Here is an excerpt from the protocol (published on the website SkiGu.ru).

Advantage from second place – only 5 hundredths of a second!

On Facebook I found a photo from this competition: 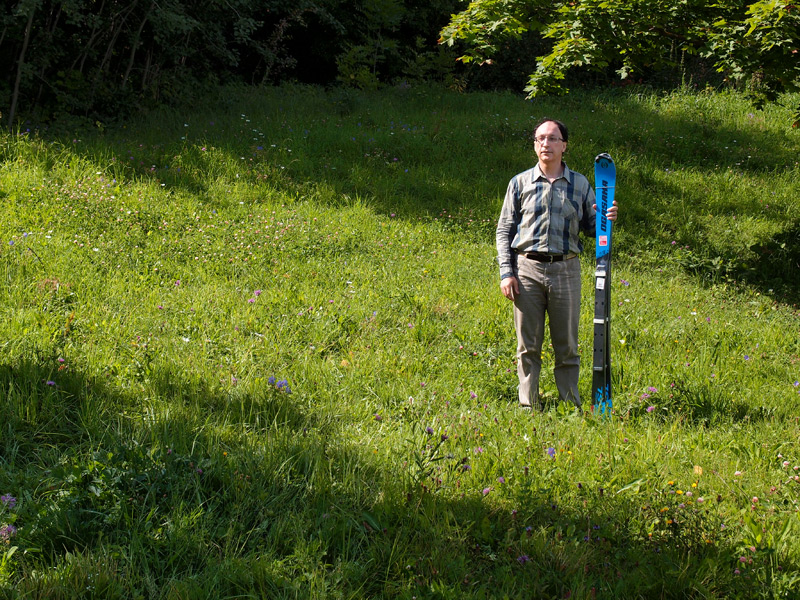