The catalog indicates that the radius of the side cutout of the Ogasaka Triun SL 17/18 ski, length 165 cm, is 11.0 meters. This is a fairly radical cutout for nowadays slalom skis, the traditional radius is 12.5 + – 0.3 meters. It is also interesting how much the shape of the side cutout corresponds to a circle, that is, how much possible to speak about the radius, and not just the “radicality” of the side cutout. For this purpose I measured the width of the ski in 0.5 cm steps. 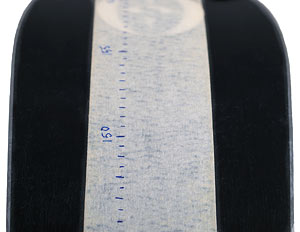 On the sliding surface of the ski put the painting tape with the markings, the width measured with a calipers, the accuracy of 0.1 mm. 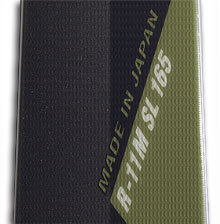 On the ski itself, only the radius is indicated, and “without tenths”.

I now turn to the calculation of the radius of the side cutout. The “transport dimensions” of the ski (the widths given above) give a little. Details here: Ski sidecut radius and radius of a circle. To calculate the radius (assuming that the side cutout is an arc of a circle), the on-line FIS calculator is well suited. 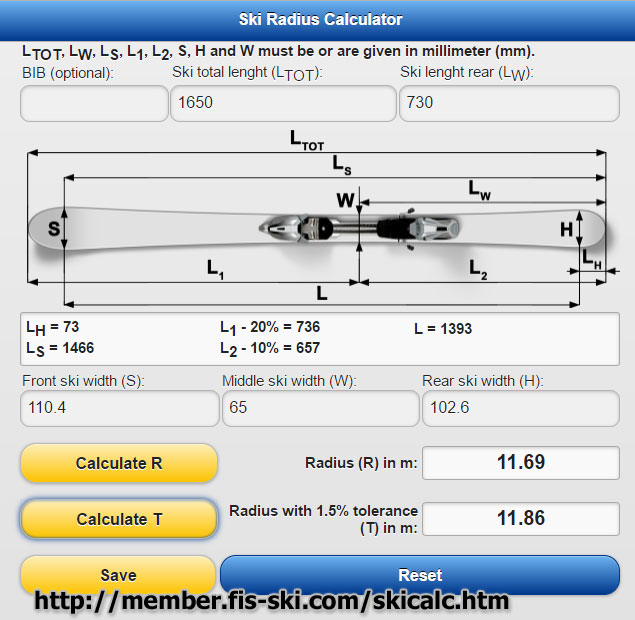 I will move from the measured distribution of the width of the ski to the sidecut and see how much the circle fits into the shape.

It can be seen that the side cutout is a circle.

The shape of the sidecut can be mathematically “put” on the edge and see what will be the trace on the snow. This was done in the note Ski sidecut radius and radius of a carved turn. Here I will use the ready method. For skis Ogasaka Triun SL 17/18 (165 cm), the trail of a carved turn is a circle whose radius varies with the edge angle as follows:
More precisely, the circle fits into the track on the snow until the angle of the edge of 82 degrees, then the deviation, which is noticeable on the graph for the angle of 85 degrees, begins.

It is interesting to note the “motion” of the projection of the center of the circle. The greater the angle of the edge, the closer to the tip of the skis the circumference of the ski shifts. This is due to the fact that the width of the tip is greater than the width of the tail, so when skiing, the ski goes “sideways” more than it should be by the radius 🙂 The difference is 13 mm depend of variation of  the edge angle from 45 to 60 degrees! There is something to think about 🙂 This is consistent with the sensations found in this season by the shift of bindings. Read more here: Move binding position forward or backward. That is, if you are accustomed to feeling the arc at the working angles of 45 degrees, then to move to the angles of 60 degrees you need to move the bindings a centimeter forward. And then you can move back when you get used to it 🙂

If we compare this graph with the calculations for Atomics given in the note Ski sidecut radius and radius of a carved turn, then it is not to say that the differences are already very large. At small angles, however, the advantage is noticeable. The Atomic must be angled to 18 degrees to make the turning radius 11.7 meters, which Ogasaka gives out right away, it can not do it less 🙂 But at working angles, for example, 50 degrees. at Atomic, the turning radius is 7.9 meters, and Ogasaka has 7.5 meters. In general, about the same 🙂

The angle of the edge depends also on the speed. While this is not considered, everything stated above is just geometry, no physics 🙂 If you do not dive into the controversial jungle, then for some particular skier going turn with a specific speed in a particular track there is some optimal angle of the edge, generally not depending on the radius of sidecut. Further, it is better to omit the chain of reasoning and immediately say that Ogasaka with a radius of a side cutout of 11.7 meters will allow you to cut the turn at a slightly lower speed than the Atomic with a radius of 12.3 m. Is it good or bad? It’s not the same for everybody 🙂