In this article I present the results of sidecut measurements of skis Ogasaka Triun SL model year 2015, 2016 and 2017.

Begin with catalog data of ski width (width of the shovel-waist-tail in mm):

The distribution of width along the ski was measured fairly accurately, my estimation of  the accuracy is 0.2 mm.

On the base surface was put adhesive masking tape marked by every 1 cm. Width of skis was measured with Vernier Caliper.

Then the same tape was put to the next ski. Since ski Ogasaka Triun SL of 15/16 season became less by 2 mm than the width of previous model, these two millimeters were deducted from measurements of ski of season 14/15. Therefore, comparison charts characterizes the shapes of the sidecut.


The results are summarized in such figure: 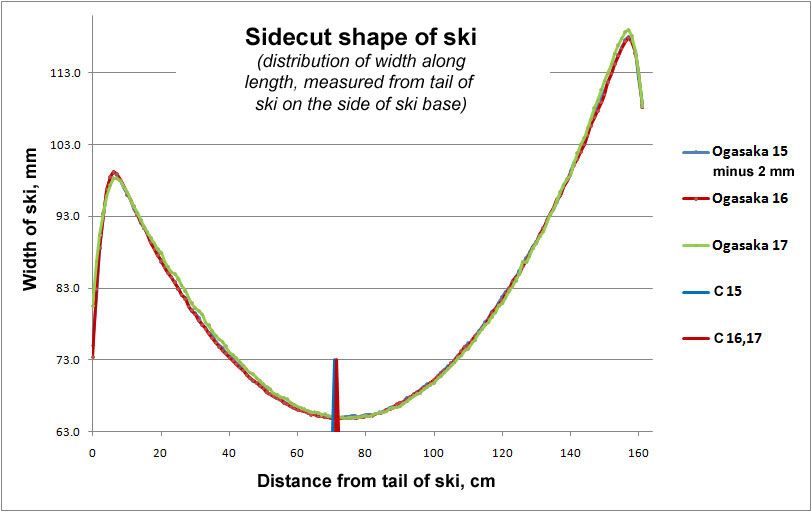 On this scale there is little seen but it is possible to note a couple of moments. First, the shapes of the sidecut skis of 2015 and 2016 matches. This is contrary to what was written in the catalog. There is a shift of boot center line to 7 mm forward and the width of the ski 2016 is lessen to 2 mm. But the shape of the sidecut has remained exactly the same as in the chart blue line showing the shape of ski in 2015 can not be seen at all, it is completely covered with a red line with data of ski 2016. Reducing the width of ski to 2mm – looks like a significant step forward. Waist width of 65 mm (as it became in the model of 2016) is an indicator of all European brands for “race stock” models, while the “store” slalom skis is also 2 mm wider.

Reducing the width allows faster change edge  but it is important that this has not led to a decrease in the rigidity of the ski torsionally. If talk about me, it is unlikely that I will notice the difference in waist  65 or 67 mm when skiing, while the lack of torsional rigidity, I think it will be very noticeable. Therefore, I would be calmer, if ski  of the same construction and materials would remained with 2 mm larger width.

About ski Ogasaka Triun SL of 2017 model year, one can note the following. Position the boot center line and the width of the waist exactly like in model 2016. Tip (shovel) is wider, but from the point of 130 cm to the middle the ski versa slightly narrower. The tail of the ski is just the opposite, from the middle and to the point of 20 cm Ski 2017 is wider then becomes exactly the same, and at the very heel as though cut to 1 mm more.


As the overall picture there is little to see, an enlarged portions. Lines connect simply measuring point without smoothing or splines. Therefore, the draw reflects the measurement accuracy, and may be precision of manufacturing too. It could be using splines with minimal deviations (ie, using the assumption that the shape of the curve should be smooth) to achieve greater accuracy, but it seemed to me, there is no need to do it here. 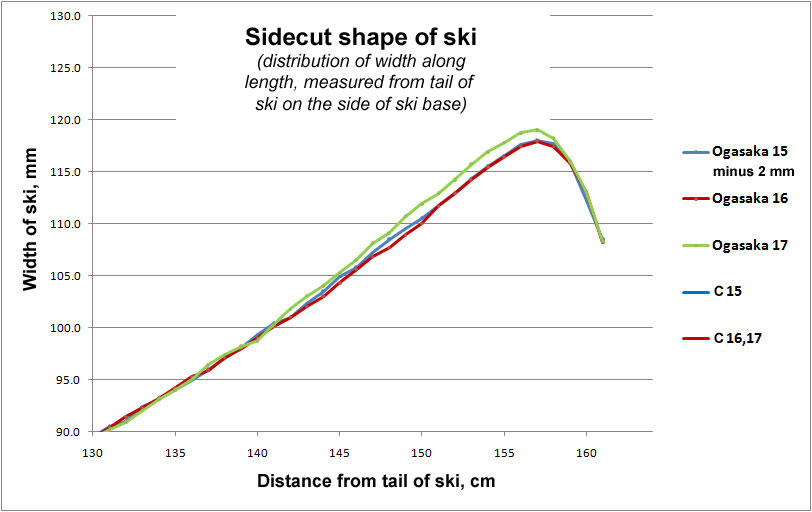 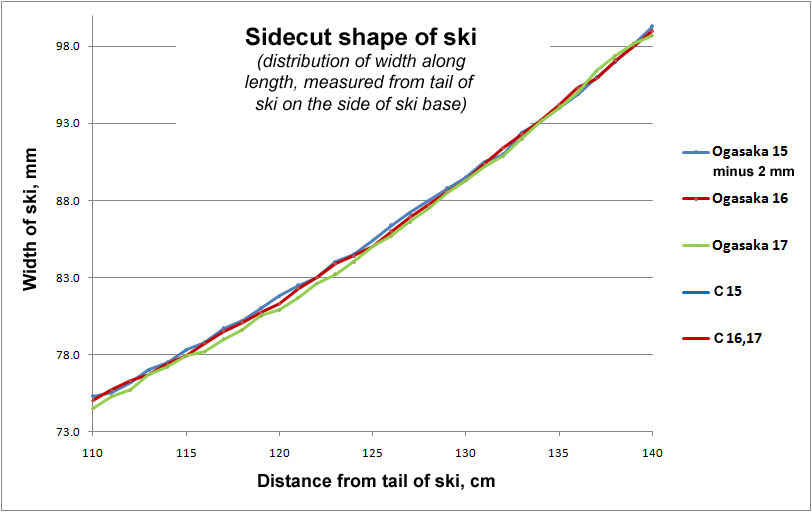 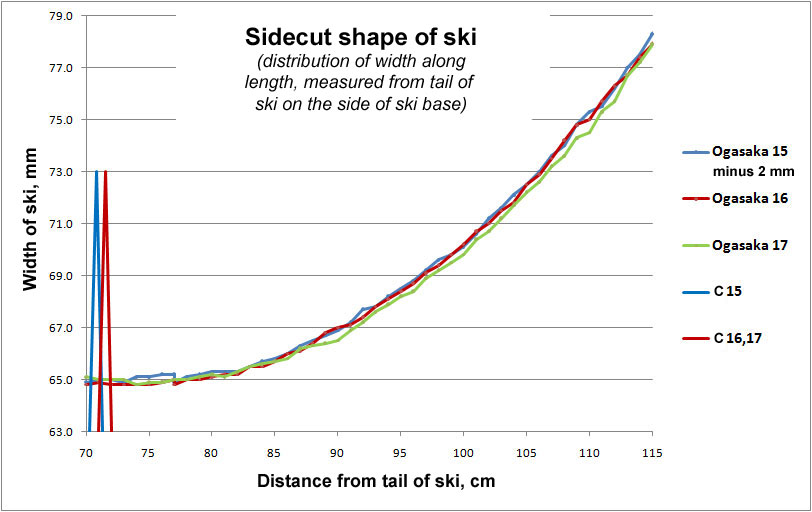 At the reagion 110-90 cm picture remains, ski of 2017 slightly more narrow, while in the central part of the ski all the curves coincide. 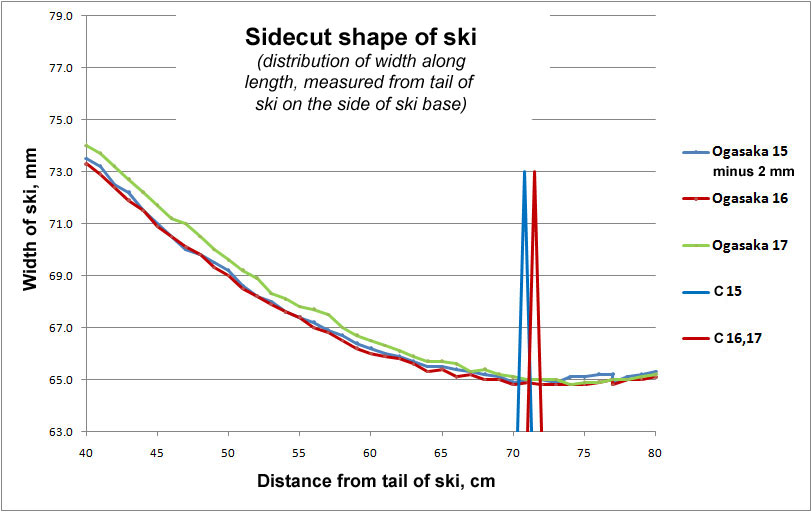 Approximately 10 cm to the tail from the ski boot center line of 2017 becomes wider and then this feature is increasing. At around 45 cm difference is 0.7 mm. 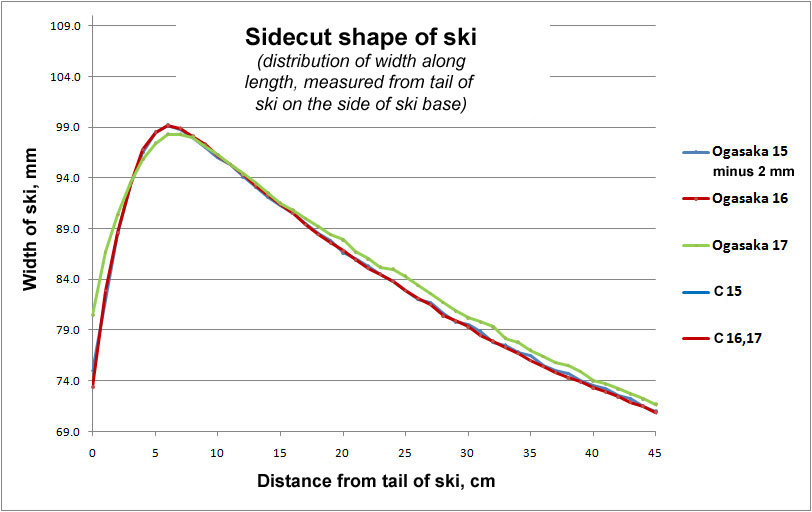 This excess width takes place to the point 15 cm from the tail and then to the final bending shapes of the cutout coincides, but final “tail shovel” itself is cut by 1 mm narrower. It seems that the designers considered that the old skis too clung by the very tail. Thus, despite the fact that the “width of tail” from skis 2017 became less than 1 mm, the entire tail is actually wider until the last 7 cm, from which the “working” part is only 2 cm for ski 2017 and 3 cm for skis 2015, 2016.


It is hardly possible to draw definitive conclusions only on the basis of sidecut shapes. We should also take into account the presence (or not) of the rocker and to compare the changes in the shape of deflection under load for these models. Nevertheless, based on the measured data something  is more than noticeable. I shall mention again these observations.

Does that change the behavior of the ski is hard to assume, since the changes, though are noticable, but not too significant. In addition, say once again that the shape of the sidecut does not define totally the characteristics of the skis in the snow.