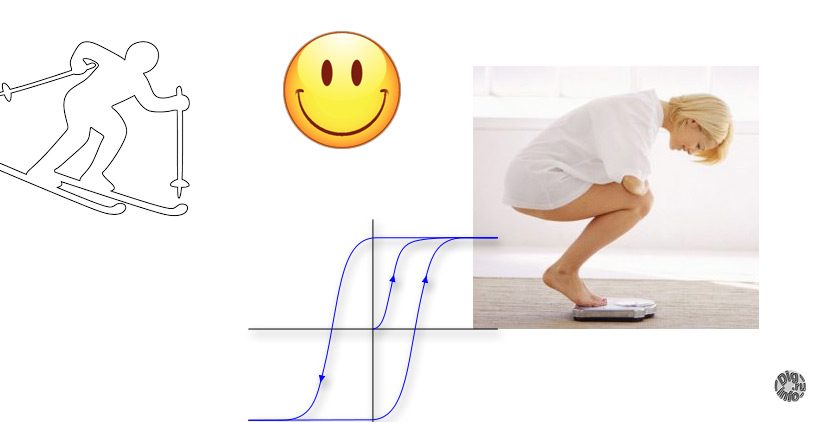 At the end of the previous turn, the skis go more or less across the slope. Then the next turn begins, in which you need to try to load the skis as early as possible so that they start carving, that is, writing out the arc. On this topic on the site there is a series of notes with the tag “Loading skis at beginning of turn“. After carving the first half of the arc, skis in a short moment go exactly down. This season (2019) found out that is scary to continue to load skis in this phase, so the instinct of self-preservation does not allow to do it. That is, when the skis go exactly down, you have to let to stop press on them, and then when they turn to the beginning of moving accros slope, press it down again. From the side it may not be noticeable, and if it is noticeable, then it is clear seen that the skier presses on the skis twice in a turn instead of one. In the note I will understand how to deal with it.

The 2018 season I finished with the acquired package of knowledge on loading skis at the beginning of a turn with the help of a sharp lowering of the back and shoulder to boot. Read more here: How to increase edge angles in ski turn. All this (2019) season continued to work in this direction, but as it turned out, I need to heal the “hole” a bit after the “start of the turn”.

Why is it difficult to load skis when “exactly down”?

Unfortunately, I have a reliable turn in the base with unloading-redirection. This is when you go across the slope in a low or middle stance, from which there is easy to straighten up. When you have to turn, you sharply straighten (sometimes you almost jump), the skis unload and allow them to be easily redirected to other side across the slope. The same can be done without straightening, but on the contrary, by quickly pulling your legs under you.

This is a reliable turn, working on any ski, on any surface, on any slope. It is not necessary to refuse it, it just should not be the main one. Modern slalom skis work much better if they are not unloaded, but on the contrary try to press all the time into an arc. And the nowadays slalom courses (even amateur ones) does not allow to fit into the turns normally when cornering with “jumps”. If you have mastered the pressure on the skis in the first half of the arc, then you manage to “bite off” a bit of this unloading. But then, when the skis go down (along the line of the fall of the slope), it is frightfully to continue pressing on them. Yes, and it is difficult to notice, because immediately after passing the direction “exactly down” comes overload. But if noticed, you can work with it. One of reliable method is  to “freeze” on the edges, that is, do not allow the body to do a micromovement of pulling your legs. Such a “freezing” from the side view is noticeable; this is a static moment in the dynamics of the turn. Arc control is still not very good. That is, the arc is controlled up to the line of a falling slope (if the first half of the turn is mastered) and after the line of falling of a slope, and in the interval when the skis are going exactly downwards – a hole. The bad thing is that the skis then have to be “caught”, so they can go into a skid, which in the second half of the turn is harmful.

Getting used to loading the skis in the “exactly down” position

A couple of seasons ago in amateur sport came the exercise “smile”. Skiing without poles with writing out of a semicircle in the form of a smiley. It came to our club from the master classes of Ivan Kazakov. Judging by the mass character of skiers doing such an exercise while the slope is empty, many coaches give this exercise. Before training, we do a couple of descents with this exercise. For example, Polina Nechaeva (thanks!) videotaped what it looks like.

Description of the exercise “smile” is quite simple. You go exactly down until gain enough speed to turn, then you put the skis on the edges and, putting pressure strictly on the outer ski, you make a quarter of the circle until the skis are across the slope. You watch for a) internal ski not go forward and b) body position  across the skis. Next, you continue another quarter of the circle, until the skis set exactly up to sloe. Either pushing the same way to the outside ski, or on two skis with the rise up of the body. 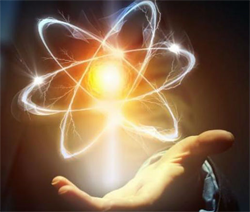 With seeming simplicity, this exercise is “inexhaustible as well as an atom”. The beginning of the exercise is related to the topic of the note: the skis go exactly down, firstly flat, then on the edges. And at the same time pressed down by your weight. The feeling: skiing down, and then “dragging” into a turn, you need to get used to. So that was not scary 🙂

Then from the “smile” you can leave the first half, that is, from the beginning – the position of the ski is exactly down, to – the skis go across the slope. Next you need not to drive up the slope as in the exercise, but turn down. At the same time, it is important to pay attention to “coming” to the beginning of the next “half smile” in the same position as it started: “skis are going down, internal ski not put forvard”. In this way, the arcs are constantly cut (without slipping in principle) with an emphasis on the pressure in the “ski down exactly” position.

This second exercise does not exclude the first. Did and “smile” and “arc”. For example, two descents “smiles”, then two descents “arcs”, and so for an hour 🙂

Then you need to add dynamics to the pressure on the skis. Indeed, the “smile” always provides pressure on the skis in the “exactly down” position with your weight. But in the real turn, in which the “lifts into the air” at the end of the previous turn, this weight may not be 🙂 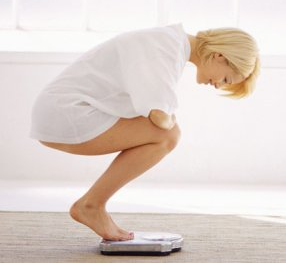 Therefore, it is necessary to add to acceleration of gravity the acceleration of moving down the body. Or in normal words, start squatting with the pressure “to the floor”, and in the second half of the “smile”, when the skis began to go up the slope – get up, but also with the pressure “to the floor”. In principle, about the same thing is done “standing on a swing,” so the sensations are familiar from childhood, you just need to “attach” them. 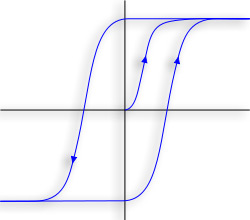 It is not necessary to dwell on the exercise “smile”, otherwise you will learn well how to do only this exercise. Indeed, an attempt to apply the accumulated lowering of the body with the pressure on the skis in the “exactly down” position in a real turn does little. It is beause hysteresis (Greek ὑστέρησις – lag). You want to put pressure on the skis when they are going down, but in fact you are late and you are pushing when they have already passed this point and are going sideways. And here there is no need to press them specially, it would be good to cope with natural overloads 🙂 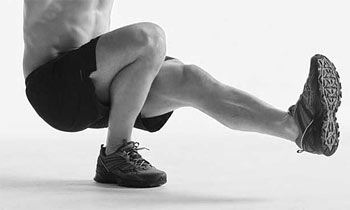 I had to turn out new sensations on the upper ski, something like the beginning of the exercise “pistol”. In general, a mixture of the “smile” and “pistol” exercises went into further work.

The bad thing is that we have come to the point where we started. Such a load with the “pistol” of the upper ski even before the line of the fall of the slope is the same as the movement “back down, shoulder to boot”, disassembled last season (read more here: How to increase edge angles in ski turn). But if the body’s reserve for a sharp lowering is already ended, then in the “ski-down” position it only remains to “freeze”. At the same time, there is no additional acceleration of the center of gravity downwards, that is, you push on the skis only with your own weight (more precisely, by projection, taking into account the slope). In general, the hysteresis is quite bad, only spoils.

Nevertheless, the “smile” and “pistol” give the effect, at least you get tired for the descent much more, and the slippage of the skis less 🙂

As it turned out, there is good news: to defrost the frozen body can be a sharp displacement of the pelvis (buttocks) inward of turn.

So, did everything that could before the skis went exactly down and froze. Why? Because If you continue the movement of the full body, for example, inside the turn, you will flop on the inner ski, which the body will helpfully substitute in advance with “A-frame”. That is, the body is not just frozen, but “froze” as a gyroscope to maintain stability with pressure on the outer ski.

I realised that the feeling of stability is determined by the position of two points of the skier-ski system. Shoulders and skis. This does not mean that the shoulders exactly up on the skis. There may be a rather pronounced angular position. It  depends on what were up to this point. But you can not move your shoulders in or out. They are like a gyroscope, frozen, because they determine the balance. The same for skis (or rather the external ski). It defines the support on the slope, besides it is carved to the arc. But the pelvis is not included to this system. Therefore, it can easily be shifted inside. Without destroying the balance of the shoulders and skis. 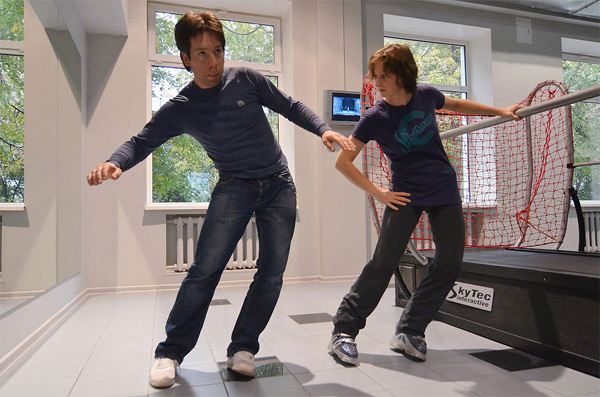 In fact, the shoulders of course shift down, but the internal sensations that they are fixed in place as a gyroscope 🙂 But the body as a whole noticeably “defrosts”. The downward movement, which has reached the extreme point defined by the physical form and the instinct of self-preservation, transfers into a movement of the pelvis inwardly. Moreover, now I do not feel the limitations that stop this movement.

From the side view, by the way, nothing new, we can assume that angulation in loins is described 🙂

Extremely useful events now happen to skis. Skis much better cling to the slope, and more narrow (closer to each other). The arc of the turn is like stretched, and there is an additional place for maneuver. Well, finally, you can calmly press when the skis are going down the slope 🙂

Summarize the complex of movements

Works well in free skiing and in slalom course!