The second half of the arc (starting from the position of “ski-go-down” and ending with “ski-go-across”) does not cause difficulties. The resultant forces well presses the skis to the slope, so everything happens under complete control. From the position of “ski-down,” you can exit in two ways: cut a round turn or put the skis across the movement and go out by slip on the edges. Interestingly of course round turn, lateral slippage is a “spare parachute”, if something goes wrong. However, the round turn can be flat or steep. And it’s not so much because of technique, but because of “hovering” in the “ski-down” position.

Shortly about the first half of the turn

In several notes, I tried to analyse the first half of ski turn. In the figure on the left, this is indicated between two red arrows. Just in case, here are the some links:

Ski pressure control at first half of turn. Here, the change of effective slope along the round trajectory is considered and it is shown

that in the first half of the turn the skier seems to jump from a springboard so loading skis is not easy.

Slalom, work on technique in the season 2016. Catch the arc. Here is considered practical advice how to catch

the pressure on the ski. You need to load the upper ski and give the chance to it to do itself edge change and turn.

Slalom, work on the technique in the 2017 season. Shorten the arc.

This shows how you can quickly load the top ski with the help of “jerking” the skis back. It is assumed that the carved first half of the arc is already in use.

How to use centrifugal force in initial stage of ski turn.

Here, the loading of the external ski after the edges changing has been analysed.

Start of the second half of the turn

So, we came to the beginning of the second half of the turn. Skis go exactly down the hill (as shown on picture above), speed is gaining, pressure on the skis increase more and more. Of course, all this if everything was normal in the first half of the turn. If something went wrong, then the “ski-down” phase skips through the air (or on unloaded skis), while on landing skis are put across the slope for braking. 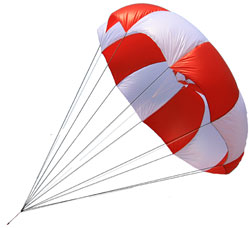 Unfortunately, such “spare parachute” is revealed more often than necessary. You can, for example, just lose an arc, because the skier can not make the turn of the because of steepness. And sometimes skis just become cross like by themselves, you do not even have time to figure out how this happens.

Back to the phase: skis are going exactly down. Unfortunately, there are several other factors affecting how skis will go further, such as the steepness of a slope, the loading of an external ski, the centrifugal force.


Steepness of the slope 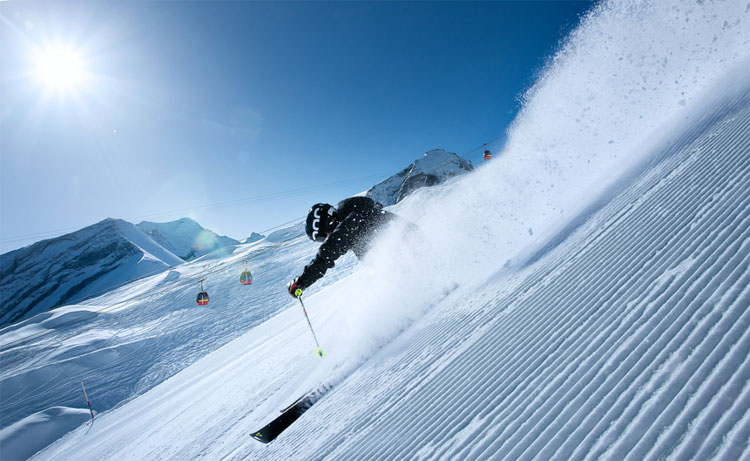 There is a big difference, a steep slope (for a specific skier) or not. Because when the skis go exactly down, there is no speed control. If the speed is gained above the “limiting maximum” (for more details here: Slalom, training of adults, section: “Burnt” maximum speed”), the skis will immediately slow down, regardless of the will of the skier 🙂 So on a very steep slope skis go into drift, and this is out of topic of this note. 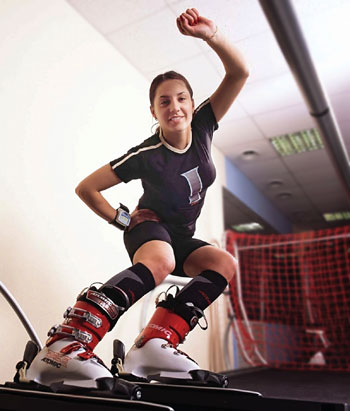 If you do not brake, then you can go from of the phase of “skiing down” only with a cut turn, that is, on the edges. It’s not very difficult, because pressure comes on the skis. In the first phase of the turn there was a problem with the loading of skis. And in the second phase, “the pendulum swings to the other side” and the load begins to “return”. You need to dispose this load between skis. If you go on two skis, then the load of each ski will be two times less than if you balance only on the external ski. Therefore, turning on two skis will not be as steep as on one ski and thatwhy you can “hang” in the phase “skis-down”. It all depends on the steepness of the slope, if the slope is flat and a steep turn is not necessary, then it is quite possible to go on two skis. But better to have technique how to load only one ski (I emphasize that this is a “ski-down” position). External ski can be loaded using “hip angulation” (angle in the waist) and using centrifugal force. In fact, both factors take place simultaneously.

The use of centrifugal force 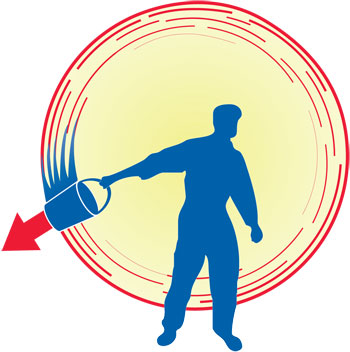 Let’s assume that the first half of the turn was good, round and therefore at the “ski-down” point there is a good centrifugal force, which loads the external ski. To do this, you need to shift the outer skis forward (and if need pull back the inside ski to keep longitudinal balance). More in the note:  How to use centrifugal force in initial stage of ski turn.

Nevertheless, at the “ski down” point the centrifugal force is easy to lose. If suddenly it seems that you go to the gate too “straight”, that is, the skis can catch on the pole, you instinctively “release” the skis to insert a straight line into the path. On the straight section, the centrifugal force disappears immediately, as a consequence, the distribution of load  between the inner and outer skis is disturbed, usually a unexpected fall to inner ski occurs. The outer ski loses its load and unbends. On this round turn ends, you go on a straight line to the gate and then put the skis across the slope for brake.

Taming the second half of the arc

I turn to the main topic of the note. For what it is necessary to shorten (tame) the second half of the arc? In principle, it is generally not harmful to own the technique of a carved, but short turns. Extend it if necessary, no problems. But, most importantly, you need to remove the unpredicatble gain of speed as analyzed above. If the speed should be lowered (on a too steep slope, for example), then it is more correct to make it under control. That is, to start drift (side slip) in the phase of oblique descent before the turn. And the second half of the turn is very desirable to pass cleanly, as drift takes the trajectory down.

How to shorten the “ski down” phase? 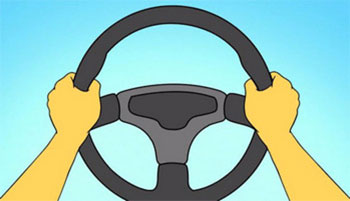 According to my observations, strangely enough, a significant role is played by the psychological factor. The point of the arc, when the skis go exactly downward, is perceived as the “beginning”. So then the skis must gain speed, then it becomes clear how they will turn, and only after that planned the point of go out from downward. That is, inserted a hangs and a straight line as sequence, which, as discussed above, is extremely harmful 🙂

Such psychology, as it turned out, quite easily “tunned”. You just need to essentially lift up along the slope the point of coming off from the downward direction. When this happens, you can remove the feeling of “beginning”. To do this, better remove the feeling of “ski down”. That is, when the first half of the arc ends, if everything is normal, then the upper ski is already pressed down to the slope. At the “ski down” point, the upper ski becomes external, but in fact nothing changes, it is also loaded and carve the arc. Therefore, there is no special downward move, you go in a circle. And you do not need to hang in it. And the point planned cominng out from the downward movement should be replaced by the point at which skis should be later, when round turn over and the skis are traveling across. 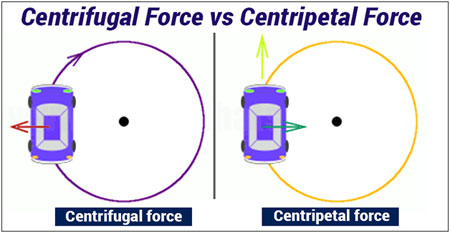 The second factor, which helps to reduce the arc, is the centrifugal force. If you enter into the habit of not losing centrifugal force in the “ski down” position, then it becomes possible to use it for turning. Something like this. In the first half of the arc, you push the outer ski forward, as described in the note How to use centrifugal force in initial stage of ski turn. The skis are go around circle. Something like the turn on the rails, or unwinding the iron on the rope around itself. Centrifugal force is accompanied by a centripetal (they are balanced). But this centripetal force is not felt in the first half of the turn, since it is directed approximately in the same direction as the “driving force” – the projection of gravity. But when the skis go exactly down, the centripetal force is directed exactly sideways and this is the only force in this direction. Therefore, if it does not losed, then it calmly drags the skis sideways, into a steep turn. As soon as it realised for the first time, “psychology” immediately takes this into account.

How do you recognize that the second half of the arc is shortened? In a free descent it is quite noticeable. At the same linear velocity of the center of mass and with the same horizontal size of the turns, much more turns could be done at the same slope. And with the same efforts.