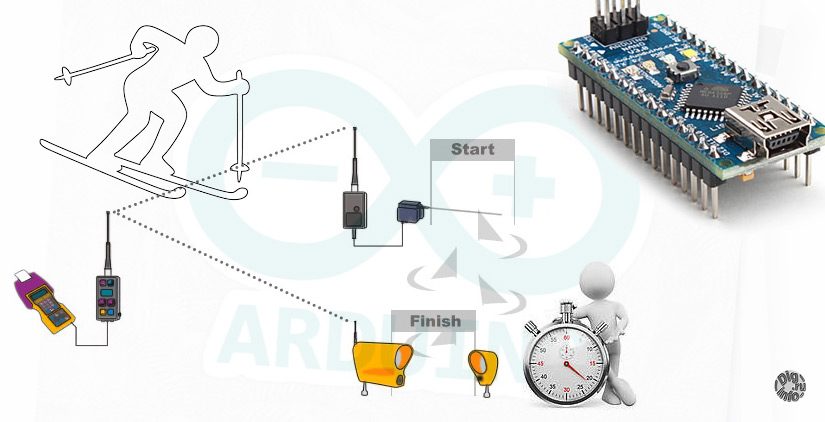 In slalom training in Moscow (that is, on small hills with a height of 50-55 meters and a slope length of 250-300 meters), we sometimes put DYI timing system. The gate at the start and photocell at the finish, and the clock. Communication between start and finish over the air (radio). It so happened that we call the timing system for ski as “omega”. So, our omega broke – the radio channel stop working. So the idea arose to assemble a new one based on the Arduino, i.e. can say that without a soldering iron. In a series of notes I plan to cover the progress of work.

I will not describe our old omega, I will immediately turn to what I would like to have in training. 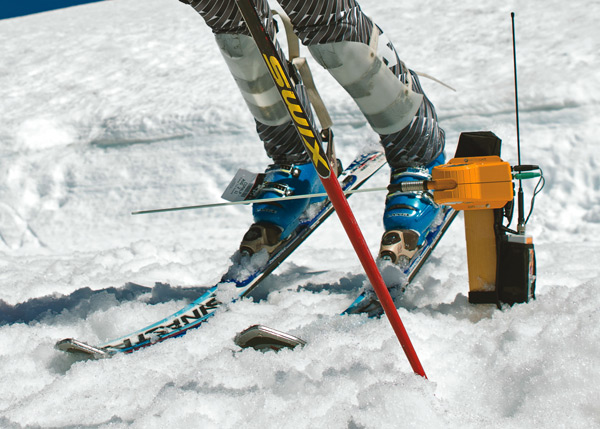 After the start of the skier, the gate (wand) should “stick” in the open position. The next participant of the training closes it and for this press the spring. That is, when opening, it is necessary to overcome the spring force, and then after opening by 45 degrees, another spring should pull the gate to the open state. The beginning of the time count is just at the fully open state. 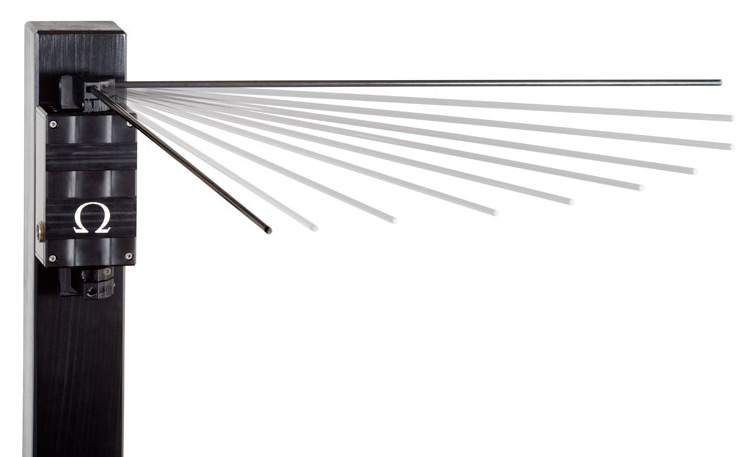 In the photo finish (photocell system) there should be an infrared beam, since visible light can work worse in snowfall. Modulation (coding) of the “emitter” – “photodetector” bundle is desirable in order to avoid false alarms. The width of the finishing gate from 5 to 10 meters. It is desirable that the IR emitter and the photodetector be in the same block, from the opposite side – reflectors (more exactly, corner reflector). 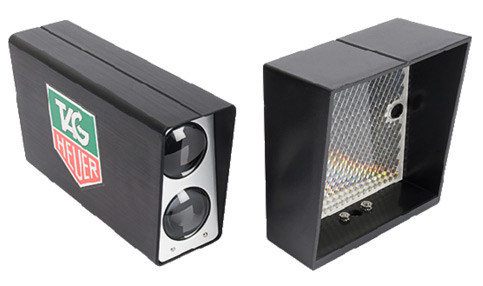 Such a system is easy to install. But it is possible and separation (emitter and photodetector opposite each other), this solution allows to significantly reduce the power of the emitter.

A chronometer that receives signals from the starting gate and from the photo finish must “hold” three skiers on the course. Accordingly, it is necessary that there are three conveniently readable time boards of four digits each: two for seconds and two for hundredths of a second. The base unit is not necessarily located right at the finish, it is better to be away so that you can get to a convenient place, for example, near a ski lift. 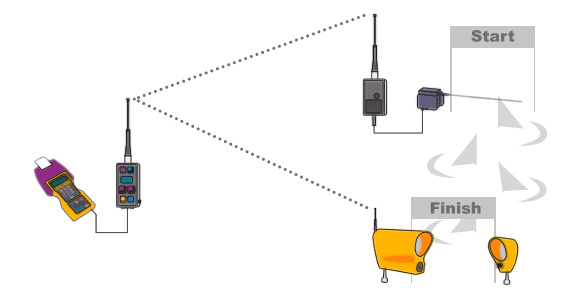 Start gate, photo finish and base unit must be connected by three radio modules, each type of transceiver. In principle, it is enough if the radio modules of the Start and Finish units are connecting only to the base unit. That is, tying the start and finish is not necessary. The range of the radio modules is not less than 500 meters (remind that the slopes in Moscow are short).

When starting, the radio module transmits an opening signal to the base module to start the chronometer (one of the three, in turn). In addition, a readiness response from the radio modules at the finish and the “base”, with a corresponding light indicator, is desirable.

If a participant has gotten off the track (DNF – “do not finished”), then you need to click on the start unit on the special large “DNF” button to reset the timer without crossing the photo finish.

The logic of the start gate control module should provide protection against false starts if it was not possible to manually close the gate from the first time. That is, the “true” impulse of the next start is possible only after the time necessary for closing the wicket.

No logic. When the beam crosses, a “stop” pulse is transmitted over the radio channel to the base unit.

The base unit receives over the radio channel the start impulse from the gate with the sending of the response to the start “the start has accepted”. When the photo finish crosses the base unit, it stops the stopwatch and also sends a finish-taken signal to the start. This is due to the fact that the participants who gather at the start constantly have the question “does omega work?”.

For minimal protection against accidental crossing of the photo finish beam, you must provide a time cut-off, for example, 10 seconds. That is, if the signal from the photo finish came in less than 10 seconds after opening the gate, it is ignored.

The base unit serves up to three participants from the logic: the start and the finish, referring to this particular start. The measured time is displayed on three boards, one below the other, with a “scrolling” so that the last recorded time is shown on the top board. 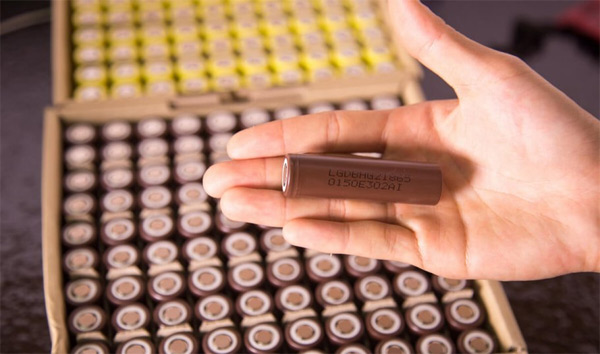 Accumulators “18650” (lithium-ion 3.7 Volts). Built-in batteries, charging through the micro USB connector, since such a connector is now common on smartphones. The battery charge should be enough for three hours of the system in cold weather. 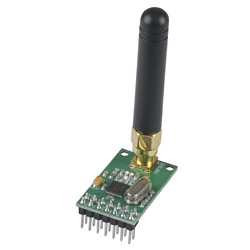 Everything should be only from ready-made modules of the Arduino platform. This will in particular ensure good maintainability.

The main computational modules are Arduino-nano. 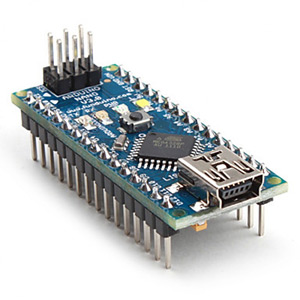 This is a single board computer with digital and analog inputs, programmable from a regular computer via a USB connector. Totally there are three such modules. To these modules adds the modules of the radio channel, buttons, LEDs and digital indicators. All modules should be “in the standard” of Arduino. 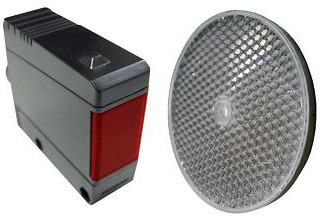 Power supply is also consist on modules: the battery itself, the charging board and the DC-DC converter board for the Arduino (5 Volt) or for the finishing gate (12 Volt).

The photo finish can be assembled on a ready-made solution for managing garage doors. 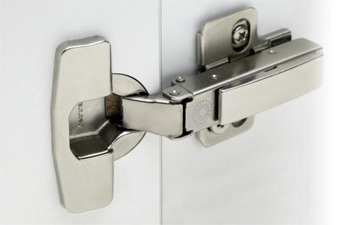 The mechanical part of the gate (a system with springs and “sticking” in the open state) can be assembled on the basis of spring hinged furniture hinges, as on kitchen cabinets.

The fiberglass wicket rod is one of the plant support options in the garden. 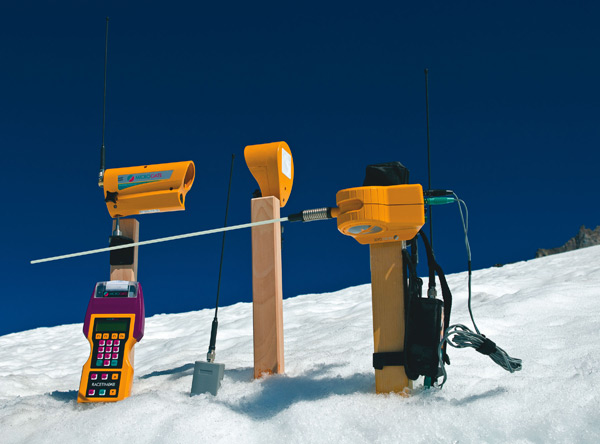 Approximately such a “training omega” from Microgate costs 3,800 euros. This price and made us think about Arduino. Since I plan to buy on Ali Express, I expect the cost of the components will be 100 times less.

In the process of implementation, for various reasons, changes and additions occured.

The main computing unit, which keeps track of how many participants are on the course at the same time, and also controls the quality of the radio communication is located at the start. Here is a three time scoreboards. 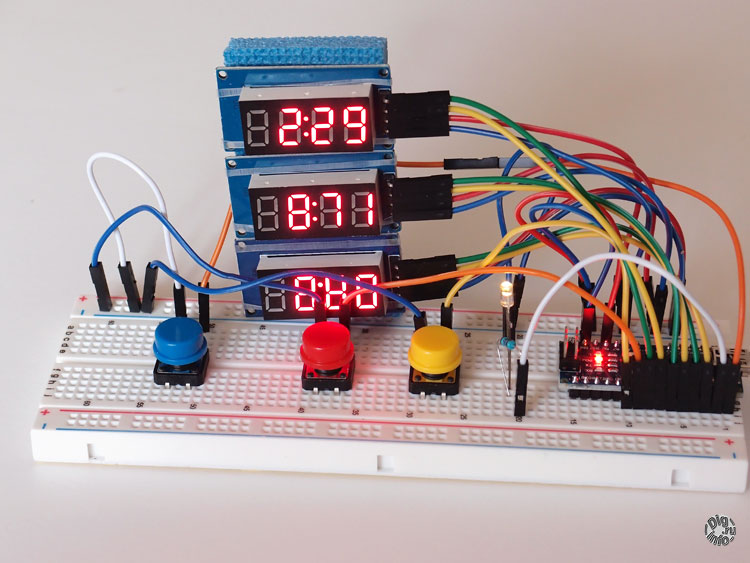 That is, on this unit there are three digital time indicators, LED indicators “You can start” and “Lost radio contact with the finish”, and the “DNF-Reset” button, which you need to press if the participant has not finished.

In the radio exchange, the “Start” unit is a permanent receiver that is tuned to a transmitter that is at the finish. The unit “Finish” periodically sends a signal to monitor the radio communication and synchronize the clock and, of course, sends a signal when the finish is crossed. Start unit when receiving a signal about the finish, calculating the result of passing the course by the participant then switches to the transmitter mode and transmits the result to the Time Board unit (and also shows the result at Start).

Only the transmitter and only on the Start unit.

Only the receiver and only from the Startunit. There are 6 digital indicators on the display, showing six current results in the reverse order. The most recent result is at the top, and after receiving a new result, the others are shifted down. The Time Board can be located anywhere, it is assumed that somewhere down the finish line after the zone of inhibition.

In addition to the main radio channel at the Start and Finish, there are short-range transmitters. These transmitters produce a coded signal, respectively, when opening the gate and when crossing the finish line. (Some) participants in the pocket have a stopwatch unit with their own digital indicator and short-range receiver. All such stopwatches are the same. In order for them not to interfere with each other (when a participant stands in a queue at the start, his block picks up the start of other participants) a simple logic is put into the stopwatch: “start” is the one that followed by the finish.

This is done in the case when the range of the main radio channel will not be enough. For example, a trip to the mountains with a small group of participants.

The cost of materials and components (excluding individual stopwatches (one in the photo above) and the Schedule Control unit (in the photo on the left) amounted to 83 USD. Although the total costs are, of course, more 🙂

The distance of radio connection in the city, keeping the conditions of direct visibility, was 1 km.

Here are collected all the notes on the theme “DIY timing system for skiing with Arduino”.