In the note I will share the experience with the order from AliExpress side edge file guide for angle 86 degrees. Why I bought, how much it cost, how long delivered, what has come.

Buying from AliExpress has in my opinion an important advantage over other online stores: you do not need to pay for shipping. How they were able to solve this problem is unknown to me, but it is really possible to buy small things costing as one metro journey. And this little thing will come to the post office next to the house.

Unfortunately, for alpine skiing on “Ali” there is not much. Apparently this online store is made mainly for domestic use in China, and alpine skiing there, it seems, is not a matter of first need 🙂

Closer to the point. The time was when the edges were sharpened from the side by 90 degrees. According to my memories, on approach to 2000 began to sharpen for ice by 88 degrees, and experimented, that is, some sharpened more, some less. 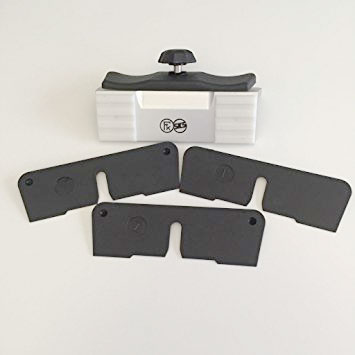 And after 2000, when the carves came to amateur sports, experiments intensified. Just in case, I bought combi tuning guide with wedges, which allowed to vary the angle from 90 to 83 degrees. Gradually came out to 87 degrees. This coincided with the factory sharpening for the “race stock”, so I considered that the time for the experiments was over. In a system with wedges I did not like the fact that the file needed to be pressed with a screw. It is more convenient for me to press it with a spring clamp at one end and press by hand at the other end and slightly move file left and right between the passages so that it cut evenly. With a clamp wedges are not convenient to use, there is a risk of a bad angle. In addition, sometimes it was necessary to remove the shavings from file, and for this purpose I had to unscrew the system. And for some years practiced “wet” sharpening, that is, the chips from the file were removed under a stream of water, and the chips could still come in between the wedges. In general, for convenience, I bought a side bevel guide  for only 87 degrees. 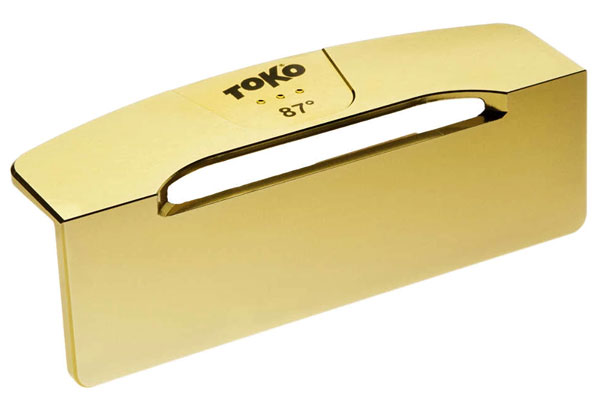 With it and sharpened for many years. Read more here:  Ski tunning, know how. 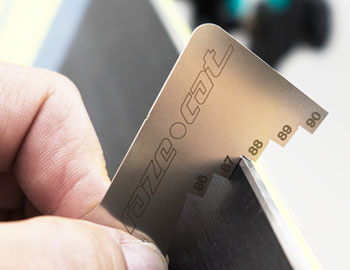 Now I decided to go to the sharpening angle of 86 degrees. So I need a new corner. Not a question, after skiing, I looked into the store next to the hill. The file guide was only 88 degrees (in my opinion no one now sharpen at this angle), and the price is somehow frivolous for a piece of aluminum. The digging of Moscow sports shops on the Internet gave the same thing. There are no angles at 86 degrees, and if they were, I would have thought hard if it really costs $50.

When buying on AliExpress there are a couple more features. If the goods are produced in China, then it costs several times cheaper than produced, let’s say “not in China”. And delivery. Quickly usually will not come.

The corner is made in China by the company “IgoSki”

. Cost with delivery was 600 rubles (at that time it was about 10 US dollars or 8 euros). This is at least three times cheaper than it was possible to find in Moscow (2,200 – 3,500 rubles). Guides of different colors, depending on the desired angle. For a 86 degrees the file guide is red.

The file guide (or let’s say, corner) was delivered in 14 days.

The packaging is beautiful, the appearance corresponds to the picture. 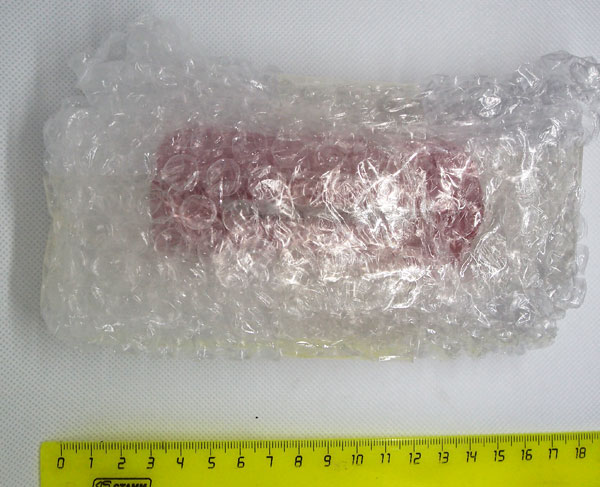 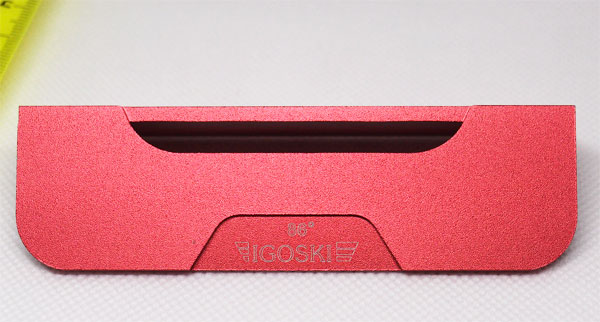 By the size of the corner was less than the one that I sharpen by 87 degrees. 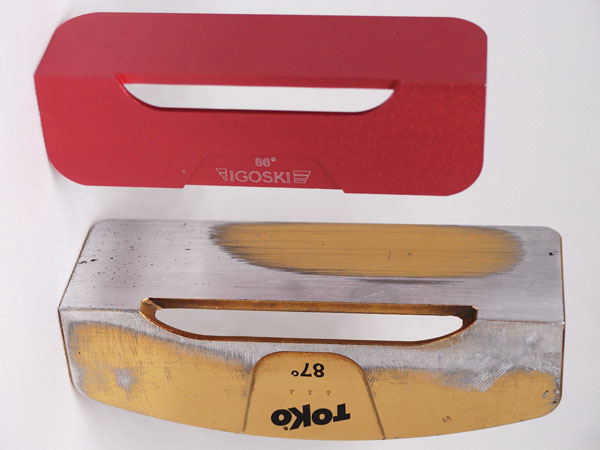 But it does not matter. The trouble is that immediately there was a suspicion that the angle is not 86 degrees, and also 87, because the difference in the eye is not noticeable. If we estimate the angles in Photoshop, it turns out like this:

Angles in photoshop can be measured with a precision of 0.1 degree. But before go to the photoshop angle depends on the point of view (although, of course, I tried to hit the end) and from the distortion of the lens. Therefore, it is not necessary to rely on the exact values of angles determined in this way, but it is safely possible to compare two corners.

It turns out that if the “gold standard from Toko” is really equal to 87 degrees, then the arrived side edge file guide was made as 88 degrees, and the inscription 86 degrees on it was made by mistake: (

Measurements by the protractor gave approximately the same values. Corners are approximately the same, “gold” 87 – 0.5, and “red” 87 + 0.5. With protractor, in general, it is difficult to measure such differences. I made the maximum quality shot of three corners at once, so that the difference was clearly visible. To these two added one, which with wedges, with a wedge of 4 degrees. True, the wedge in working condition is pressed with a file and a screw, and when shooting is not pressed, so the angle will be distorted. 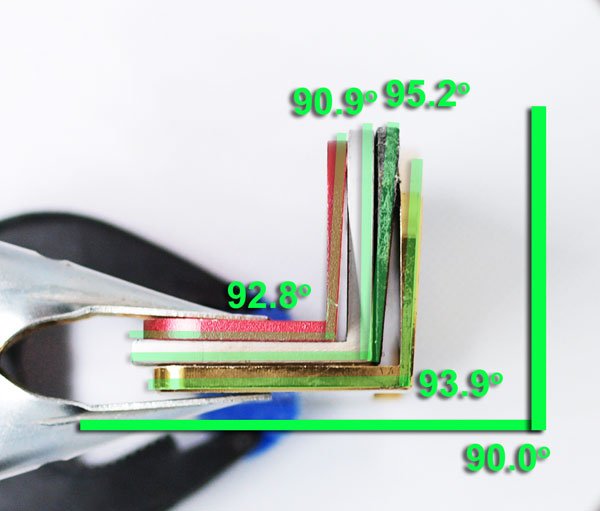 Measurement of angles in Photoshop yielded the following:

In general, it corresponds to the previous measurements. Conclusion: the file guide from Ali is not 86 degrees or even 87, but rather 88.

To finally dispel doubts, I decided to measure the angles with the best possible at home accuracy. To do this, I used fairly straight (judging by the ruler) files and a sheet of paper. 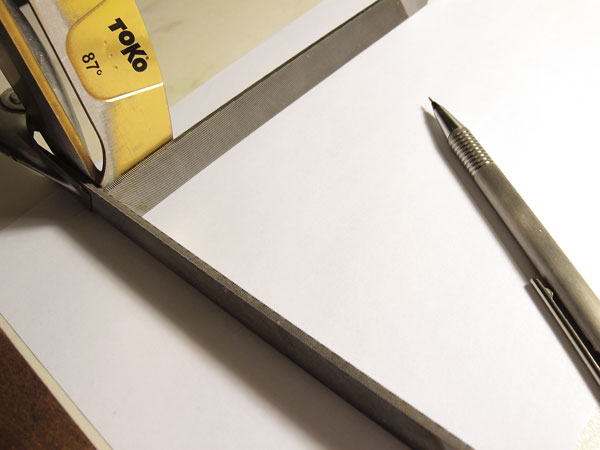 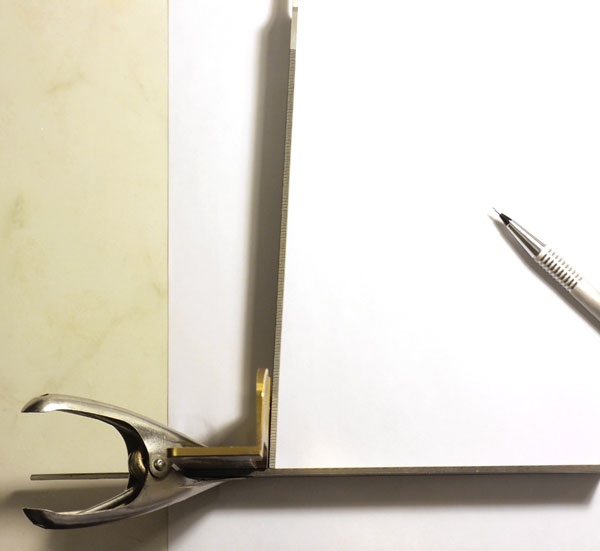 It turned out a series of triangles for three guides. 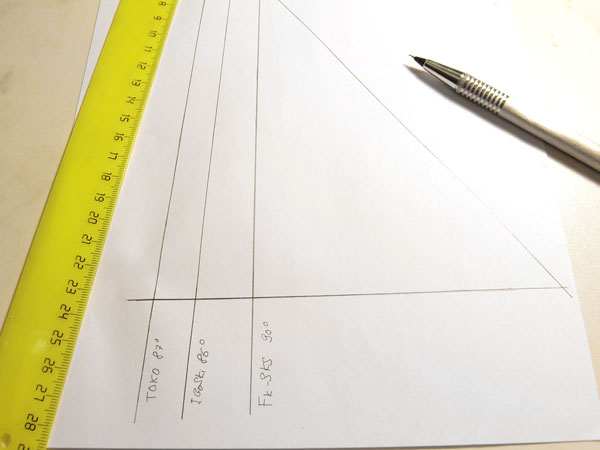 Then the lengths of the sides of these triangles were entered into the online calculator, which calculated the angles by the cosine theorem. 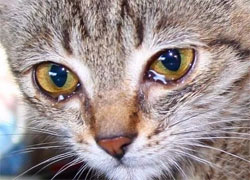 In general, with this corner with AliExpress is unlucky. Claims against the seller do not need to be presented, it worked perfectly. Well, to the manufacturer, as far as I understand, do not get through. The manufacturer makes the corners of different colors, for each value its own color. Probably just confused. On Ali there are corners “from another” manufacturer with the same red coating, but for 88 degrees. 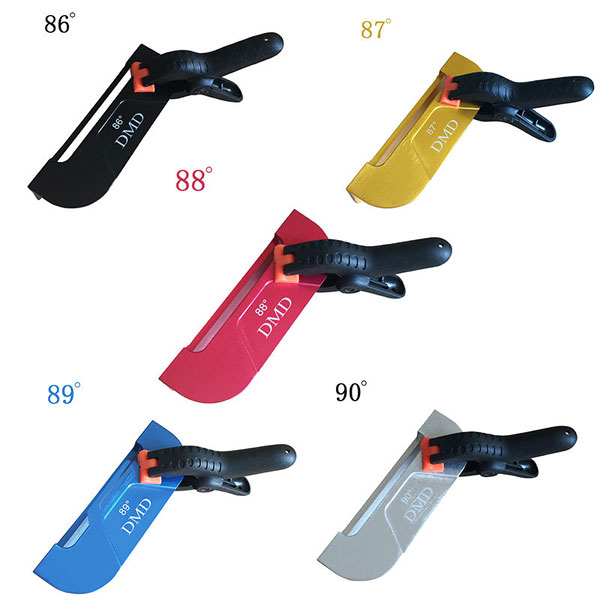 Could be done in one place. And for IGoSki before engraving, the correspondence of color and angles was confused. However, this is just a version 🙂

Dug into Ali and accidentally found another file guide from the manufacturer XCMAN, which immediately inspires confidence 🙂 Find it earlier, unfortunately, could not, because it is hidden here:

It looks on the “showcase” of AliExpress like this: 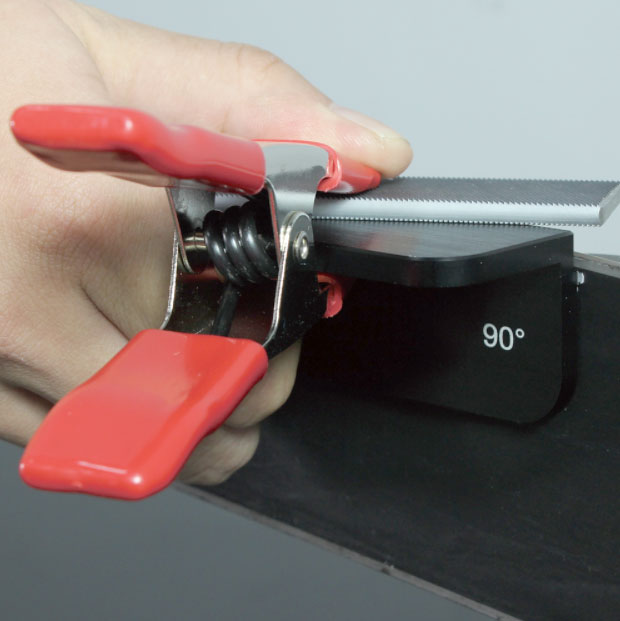 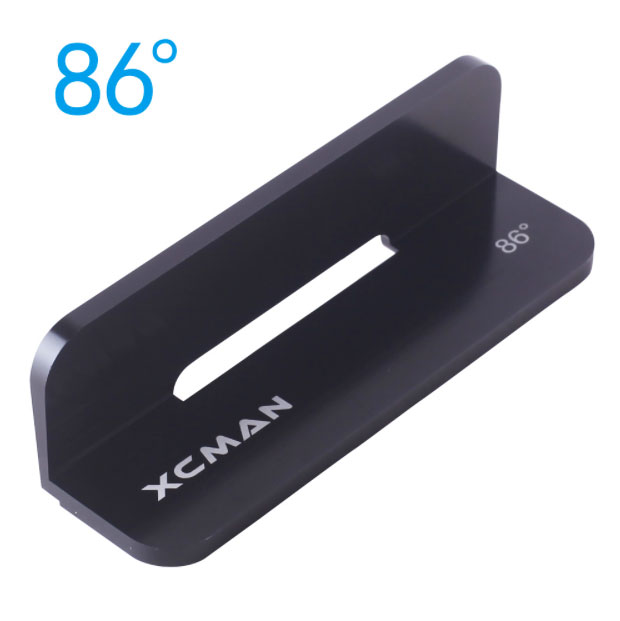 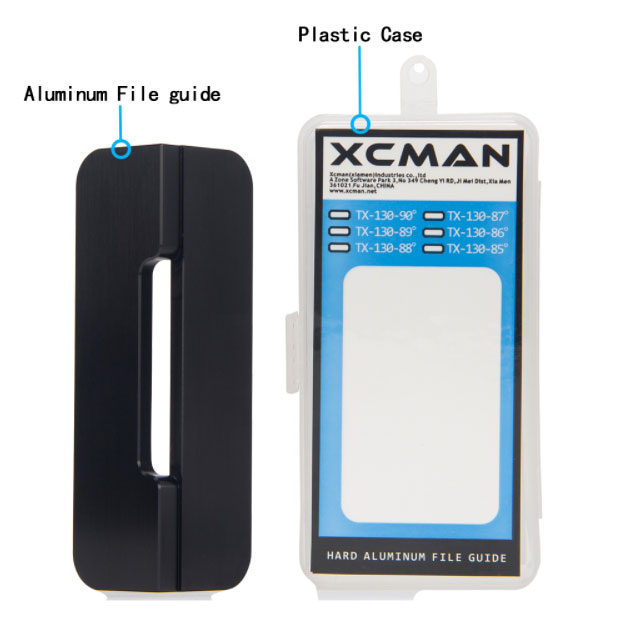 Price: 970 rubles (16 dollars or 13 euros). Ordered. Courier brought in three days (on the site was the opportunity to choose the delivery from Russia). Corner makes an impression 🙂 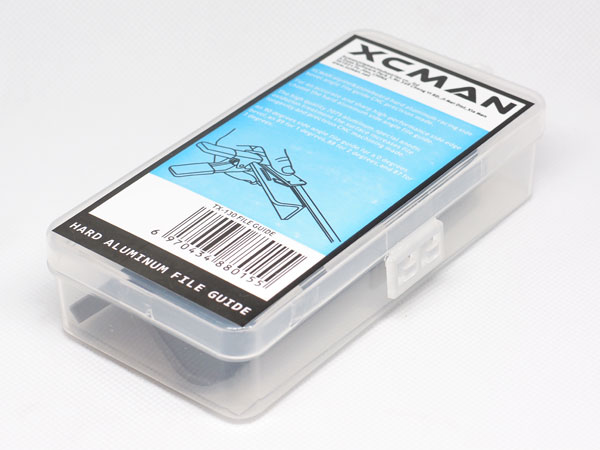 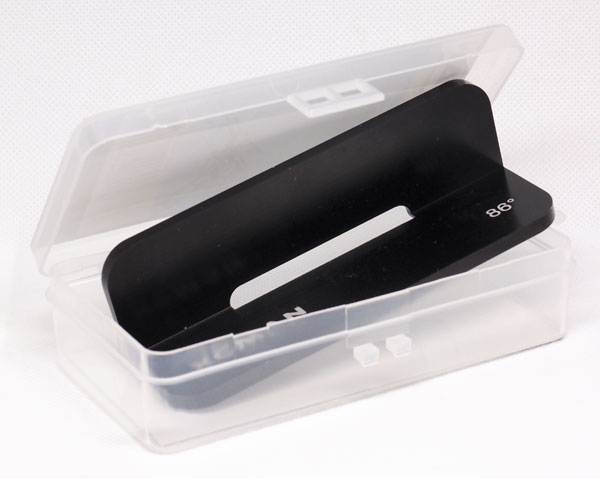 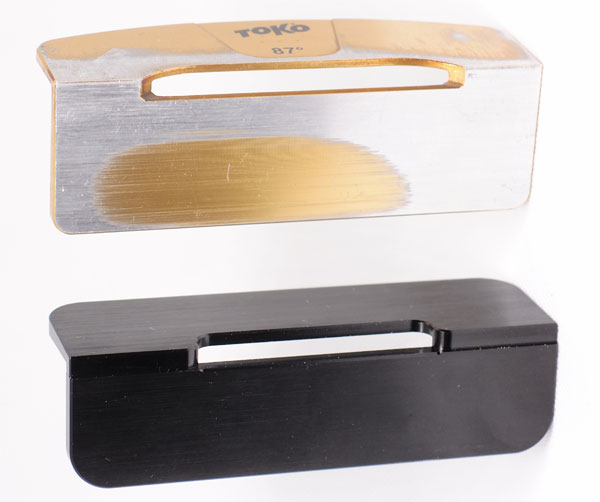 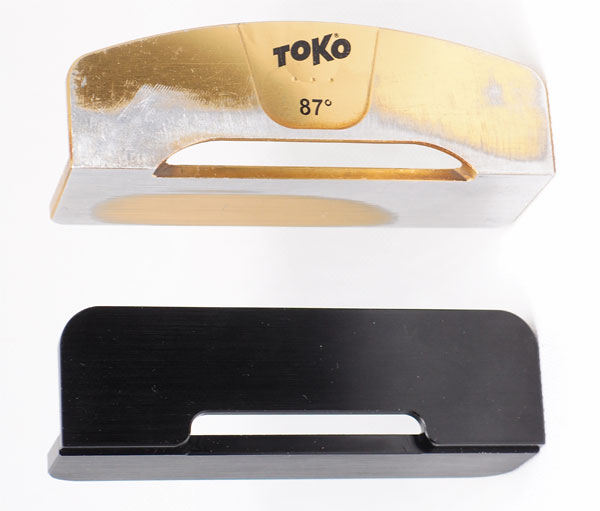 A triangle check on paper gave an angle of 85.8 + – 0.2 degrees. Question successfully closed 🙂

Since I had to immerse myself in the topic of the side edge file guides, I will leave here some of gained knowledge.

I proceed from the fact that it is not known exactly what angle was set to the machine during the production of the corner. The methods given above seem to give a precision of plus-minus 0.2 degrees. Therefore, the “spread” in which the real angle falls is about half a degree. The most accurate method of measuring the angle was obtained with the help of files and a sheet of paper. 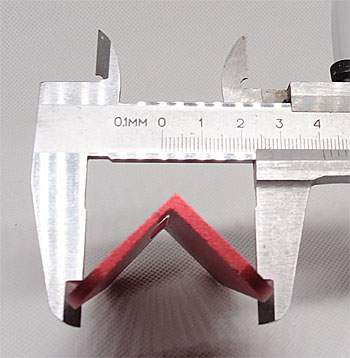 It is interesting to note that “along a triangle” you can sometimes quickly obtain angles from measurements with a caliper. Especially if the shape of the corner is “without frills”. That is, you can measure the sides of the triangle – the edges of the corner and the distance between the faces with an accuracy of 0.1 mm. And then calculate the angles, such as the online calculator. Or on an ordinary calculator, according to the formulas from the reference book (as my dad did, showing the method by “calipers”).

What angles do they do?

The above measurements show that the angles are made slightly “to minus”. Apparently, it means that, for example, 86 degrees is not a file guide setting, but how much the edge should be sharpened. Therefore, probably there is an “reserve” to the fact that the file, when pressed, slightly leans away from the edge of the guide and the real angle is slightly more blunt than the guide is made. Thus, the “hero of the first part” the edge file guide from IGoSki, which in all measurements turned out to be 87.5 degrees corresponds to the “nominal” edge sharpening by 88 degrees. To test the assumption, in addition to above guides I have measured two guides for 86 degrees, which was provided by Vitaly Sizov. Here are the results.

XCMAN 86 degrees (described in the second part, visually not differ from above Toko, and not only from Toko, such a corner occurs under different names.) The angle is exactly the same: 85.8 + – 0.2 degrees.

The corner of stainless steel from DENiFL 86 degrees: 85.3 + – 0.2 degrees. According to observations of Vitaliy, really gives on ski a much sharper angle than Toko 86. 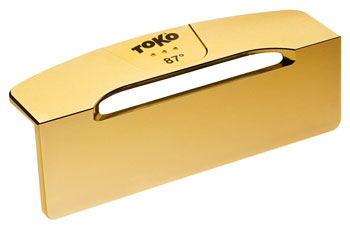 My “working” corner Toko 87 degrees, the construct differs from the “above Toko”. The angle is 86.4 + – 0.2. True, it should be noted that the corner is visibly worn, so the angle could become sharper than the new one had. This is a rather interesting result. It seems that the corner at 86 degrees could not be looked for 🙂 Indeed, when refilling the skis with a new 86 degrees file guide, as usual I paint along the edge with a felt-tip pen, so as not to remove a much. When sharpening, the mark from the felt tip was erase evenly, that is, the difference in angles between the old file guide and the new one is smaller than the thickness of shavings .